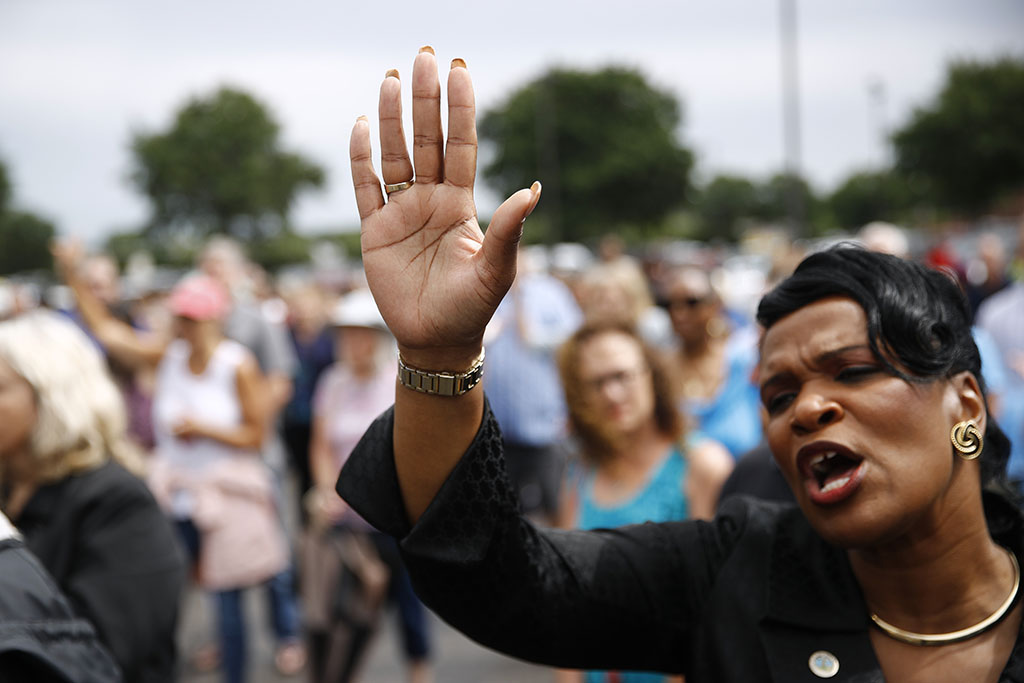 Virginia Beach, Va., council member Sabrina Wooten holds her hand out as she sings during a vigil in response to a fatal shooting at a municipal building in Virginia Beach, Va., June 1. A longtime city employee opened fire at the building Friday before police shot and killed him, authorities said. (PATRICK SEMANSKY/Associated Press)

Virginia Beach, Va., council member Sabrina Wooten holds her hand out as she sings during a vigil in response to a fatal shooting at a municipal building in Virginia Beach, Va., June 1. A longtime city employee opened fire at the building Friday before police shot and killed him, authorities said.

‘I could’ve died today’: Reactions to the shooting in Virginia Beach that left 12 dead

People in Virginia Beach, Virginia, and around the country are reeling at news of a mass shooting at a municipal building that killed 12 people and wounded four others. It’s the deadliest shooting of 2019 so far.

“I thought someone had just thrown a handful of bullet casings out in the hallway to make it look realistic.”

Ned Carlstrom thought the attack in #VirginiaBeach was a drill. He came face-to-face w/ DeWayne Craddock before locking himself in a room w/ a coworker pic.twitter.com/te4rEA24PL

I could’ve died today. I intern in Building 2. I left 15 minutes before the shooting, but there are those who were not so lucky. You never think a mass shooting can happen in your city until it does. We need gun control NOW. I’m tired of this. #VirginiaBeach

For some, the incident, which occurred over 35 minutes, is indicative of a need for increased gun control. This session, the state legislature killed at least a dozen bills that would have introduced restrictive measures.

Thoughts & prayers are not enough. We need action. Yet another community is in mourning because of gun violence. I’ll be praying for the families of the victims & the survivors tonight. We can’t ever stop working for commonsense gun safety laws to keep people safe. #VirginiaBeach

The deadliest mass shooting in the US since November. It didn’t happen in a city far away, it happened HERE. This is our home. It doesn’t matter what your political affiliation is, we should all be calling for legislation to stop this. How many more have to die? #virginiabeach

Other communities that recently experienced mass shootings, such as Las Vegas, expressed solidarity.

To the people of #VirginiaBeach: Las #Vegas is thinking of you in the wake of today’s tragedy. Like many other places, #LasVegas knows the pain you are facing. Although separated by many miles – we stand with and support you.#VegasStrong & #VirginiaBeachStrong pic.twitter.com/2dBKIvqqyX

Aaron Rouse, a #VirginiaBeach council member, was a Virginia Tech student during the 2007 mass shooting.

Now he’s guiding his city through its own tragedy.https://t.co/eS5SSPAFGu pic.twitter.com/uD7VTv7Gko

One of the many sunrises I got to see while living in VA Beach. The sun will rise again over the city that has always had my heart. Stay #VBStrong #LoveForVB pic.twitter.com/qSKDtnvHSf