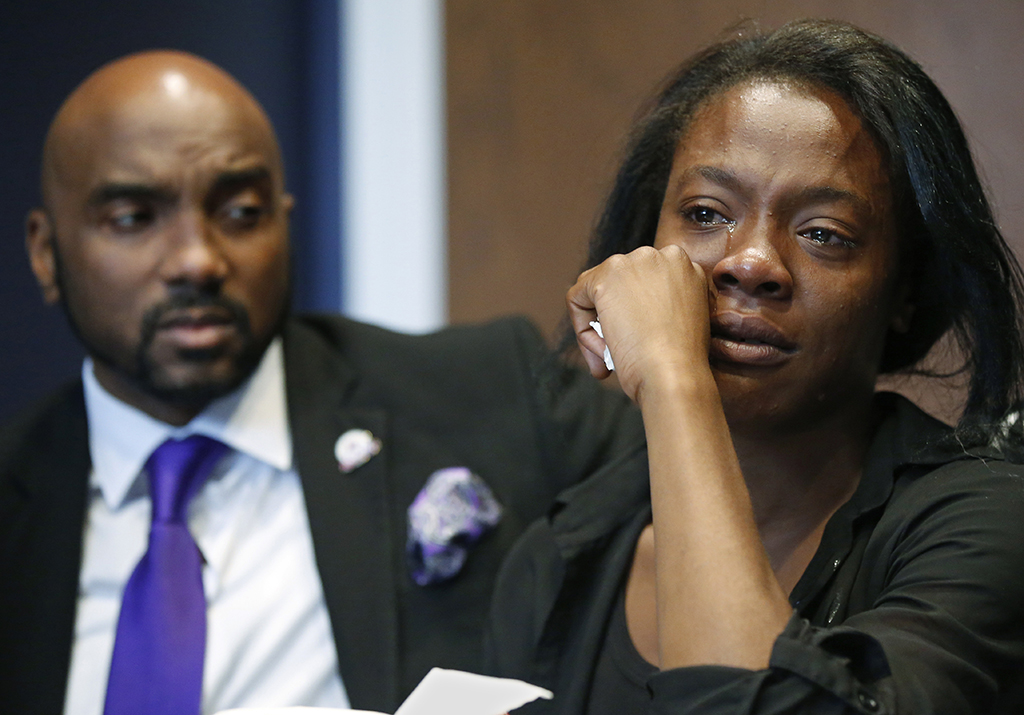 As she speaks in an interview on May 24, Olivia Hill, right, wipes away tears while her attorney, Damario Solomon-Simmons, left, looks on. Three of Hill’s children were injured when Hugo, Oklahoma police officers opened fire on a pickup truck, wounding the three children and a man who authorities say was wanted in a robbery. (SUE OGROCKI/Associated Press)

As she speaks in an interview on May 24, Olivia Hill, right, wipes away tears while her attorney, Damario Solomon-Simmons, left, looks on. Three of Hill’s children were injured when Hugo, Oklahoma police officers opened fire on a pickup truck, wounding the three children and a man who authorities say was wanted in a robbery.

TULSA, Okla. — Asia Jacobs, affectionately known as “Mama’s little helper,” struggles to fill that role since police officers opened fire on her mother’s pickup truck outside of an Oklahoma food bank and wounded the girl and two of her siblings.

A bullet pierced the left frontal lobe of 4-year-old Asia’s brain. She no longer helps her mother keep her younger brother and sister in line because she has a hard time sitting still herself. The shooting has left her anxious. Doctors visits and seizure medicine fill her days — a life upended through no fault of her own.

Even as a prosecutor looks into the April shooting to determine whether to charge the officers, details have been scant. This much is clear, though: The children are expected to face a long and hard recovery.

“Emotionally, they’re not OK. Physically, they’re here,” their mother, Olivia Hill, told The Associated Press in an interview. “But there’s a lot that we’re going to have to go through in order for everything to be even close to OK.”

Hill left Asia and her three other children inside her teal 1993 Chevrolet Silverado on April 26 while she picked up vegetables at a food bank in Hugo, Oklahoma. Two detectives looking for a suspect in a robbery that happened two weeks earlier showed up and began shooting at the truck. Police later said William Devaughn Smith, a friend of Hill’s who was in the vehicle with the children, was the man they were seeking in the April 11 holdup of a Pizza Hut, where a manager was forced to turn over $398 at gunpoint.

I just don’t really think anyone knows exactly how hard it is to deal with what I’m dealing with. You know, one day things are fine and the next day it’s like my whole life has changed.”

Smith said he was sitting in the front seat but facing backward to fix a juice container for Hill’s 1-year-old daughter when the detectives approached the truck.

“Before I could even turn back all the way around in the vehicle, I was shot once,” Smith told the AP last week during a brief phone interview from the Choctaw County jail in Hugo, where he’s being held on a robbery charge after being treated at a hospital and released. “And after that I laid across the seat and gunshots were still being fired.”

Gunfire punctured the part of Asia’s brain that controls some movement and behavior, medical records show. Asia’s 5-year-old brother suffered a skull fracture and her 1-year-old sister was left with deep cuts on her face from gunfire or shattered window glass. Asia’s 2-year-old brother was not hit.

Police in Hugo, a town of about 5,200 people near the Texas state line, have not described the shooting in detail. But the mayor, Richard Higginbotham, gave a statement to the local newspaper a week after the shooting that revealed the detectives were in an “undercover” vehicle and followed Hill’s truck to the food bank. He said once they were there, they got out of their vehicle and tried to walk up to the truck.

The driver of the pickup put it in reverse and struck one of the detectives, the mayor said. The detectives, who were in plain clothes and not uniforms, then opened fire, he said.

The detectives did not see the children when opening fire and only realized they were in the back seat when approaching the truck, Higginbotham said.

An attorney hired by town officials since the shooting, Scott Wood, said detectives Billy Jenkins and Chad Allen both fired their Hugo Police Department-issued 9 mm handguns. He said they remain on paid leave.

A review of the shooting, which the AP obtained through a public records request, shows that a panel consisting of five Hugo police officers and the Choctaw County sheriff found last week that neither detective violated department policy.

Hugo’s use of force policy states that officers should move out of the way of an approaching vehicle rather than shoot at it. The policy adds that officers should only shoot at a moving vehicle or its occupants “when the officer reasonably believes there are no other reasonable means available to avert the threat of the vehicle, or if deadly force other than the vehicle is directed at the officer or others.”

Wood said Jenkins suffered a “slight ankle sprain” when he “scrambled” to get out of the way of the truck but was not injured when the vehicle “sideswiped” him while moving backward.

No gun was found in the pickup, Wood said.

The Oklahoma State Bureau of Investigation, which was called in for an outside probe, says it has submitted a report to local prosecutors. A group of Hugo residents wrote to the prosecutor handling the case, asking him to release the bureau’s report after he decides whether to charge Jenkins and Allen.

District Attorney Mark Matloff told the AP he’s prohibited by law from releasing the report and will follow the same procedure in this case that he does in any other.

“If there’s wrongdoing then I’m going to file charges,” he said.

Solomon-Simmons said Hill is considering federal and state lawsuits. He said the number of shots fired shows the officers’ disregard for not only the children but for people inside the food bank.

He said he has heard Hill’s children ask why they were shot.

“They’ll tell you what happened, and it’s just devastating to hear a 4-year-old say, ‘I was shot, and I was bleeding all over me, and it hurt,’” Solomon-Simmons said.

Beyond physical injuries, violent incidents and post-traumatic stress can cause developmental backsliding, said Julie Kaplow, chief of psychology and director of the Trauma and Grief Center at Texas Children’s Hospital. The effects of an early trauma can stalk kids into their later years without proper treatment, she said.

Hill’s truck has been impounded as evidence, which initially meant family or friends had to help drive her and her kids from Hugo to the hospital in Tulsa, 180 miles to the north. A few weeks after the shooting, a group in Tulsa that helps people buy affordable cars donated a minivan to her.

But the mother is still worried about finances. She works in home health but hasn’t been able to return to the job since the children were hurt.

She already received her first bill linked to the kids’ medical care. Each child was flown in a separate medical helicopter to a hospital in Tulsa the day of the shooting. An invoice their mother received in the mail for just one child’s ride listed a cost of almost $75,000.

“I just don’t really think anyone knows exactly how hard it is to deal with what I’m dealing with,” Hill said. “You know, one day things are fine and the next day it’s like my whole life has changed.”