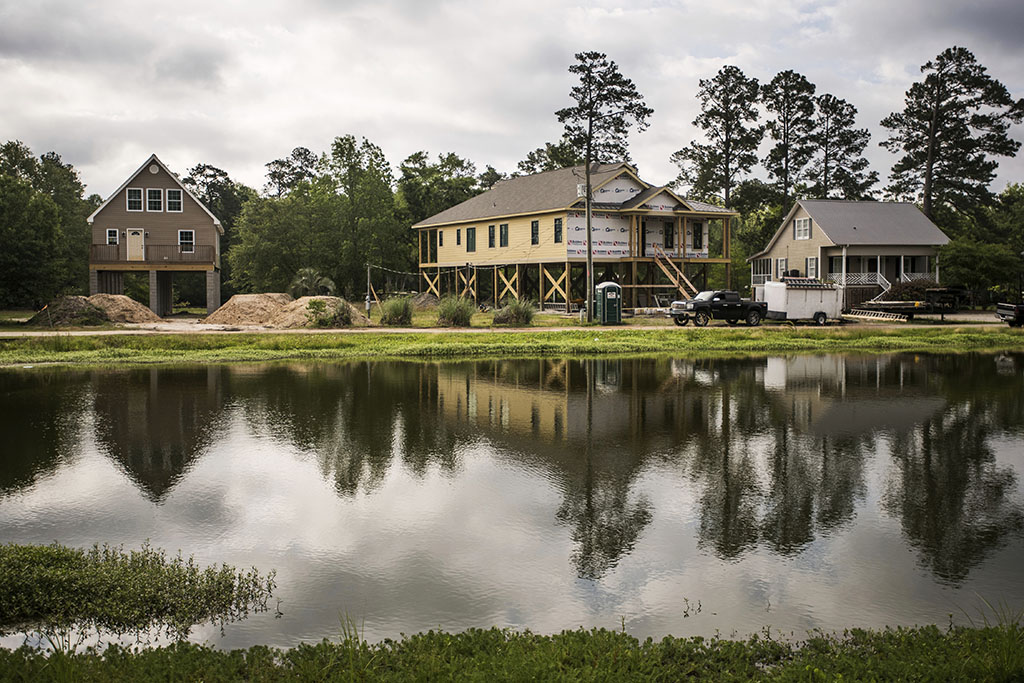 New homes are built on pillars along the Little Pee Dee River, in Nichols, S.C., captured on May 13, 2019. Nichols suffered devastating flooding during Hurricane Matthew 2016 and Florence in 2018. (SEAN RAYFORD/Associated Press)

New homes are built on pillars along the Little Pee Dee River, in Nichols, S.C., captured on May 13, 2019. Nichols suffered devastating flooding during Hurricane Matthew 2016 and Florence in 2018.

The annual start of hurricane season casts a shadow of dread over coastal sections of the United States. People fret over the next Big One, even as communities struggle to recover from the last one.

For some communities, the devastation remains an open wound, as in Florida’s Panama City, slammed by Hurricane Michael in October.

Even years later, many towns still bear the scars, physical or psychological.

It’s been nearly 11 years since Hurricane Ike smashed Murdochs gift shop to splinters in Galveston while devastating homes on the Texas island and wiping away beaches that were the lifeblood of its tourism economy.

The shop was rebuilt on its stilts about a year later and today is more successful than ever, co-owner Todd Flores said.

“It was hard, but we had a lot of people helping us,” Flores said of the rebuilding, which was sped by a loan from a local bank when insurance money was slow in coming. “We knew this is what we wanted to do.”

The population has bounced back, but the demographics shifted. Many of those who lived in public housing that was destroyed never came back. That meant Galveston lost many African American families, changing the city’s character, said Leon Phillips, president of the Galveston Coalition for Justice.

“When you displace that many people in one fell swoop, that leaves very little to … keep the history of African Americans on this island,” Phillips said.

Phillips has pushed for a full rebuilding of Galveston’s four public housing complexes against the resistance of some residents who say they are a haven for poverty. Only half of the lost units have been rebuilt, but the mayor is committed to finishing the job.

“In my mind, the city was too slow to respond to the underserved or those who couldn’t raise Cain and get answers,” Mayor Jim Yarbrough said.

Between 2008, when Ike hit, and 2015, Galveston’s black population dropped 9%. But it has increased in the past few years.

“The city is definitely doing really well,” said Keith Bassett, who rebuilt and consolidated his two stores that were flooded in Galveston’s historic downtown. “Based upon what happened after Hurricane Ike, you never would have believed we would be at this point.”

The approach of hurricane season is a reminder that it’s only a matter of time before the next one. A hurricane in 1900 killed 6,000 Galveston residents. Murdochs has been rebuilt five times since it opened in 1910 inside a bathhouse.

With hurricane season days away, Janelle Crosby steps out of the cramped recreational vehicle where she has lived since Hurricane Michael ripped apart her world more than seven months ago.

More than a half-dozen friends and relatives live in three domed tents near the front of the RV, and a daughter is just feet away in Crosby’s former home, an old trailer that was split open by trees. A homeless man lives in a tent on the other side of the RV; Crosby and her husband, Wilbur, let him stay on their little plot of property because he had nowhere else to go.

Crosby, 55, rode out the Category 5 storm at a hotel and feels fortunate, despite her living conditions and poor health — she has breast cancer — because no close friends or family died in Michael. Yet she is terrified that hurricane season begins Saturday with her Florida Panhandle community still in ruins.

“I’ve already lost everything once. We can’t do it again. I can’t. I’m not strong enough. A lot of these people aren’t,” Crosby said over the drone of a gasoline-powered generator.

It’s hard to imagine what another hurricane would do to Crosby’s part of the Panhandle, where she lives near Panama City in Springfield.

Both cities are in Bay County, where 25 people were killed as Michael blew ashore with winds of 160 mph (257 kph). About 70% of the county’s homes were damaged or destroyed, and some 20,000 people were displaced. Three schools remain closed because of damage, as do many businesses and apartment buildings. Officials estimate 13% of the county’s 185,000 residents simply left.

The Federal Emergency Management Agency provided Crosby and her husband $1,300 in aid and offered a temporary condominium nearly 15 miles (24 kilometers) away in Panama City Beach, she said. The family declined the housing because her husband didn’t have transportation to get to his job at a transmission shop, Crosby said.

So the couple remains in the camper, shooing away the occasional rat and pooling resources with the tent dwellers.

“If one of us has generator gas, we all have a fan, or if we have propane, we all get to cook that night,” she said. “If not, we get out here and make fires and cook. We’re surviving.”

Nearly 27 years after Hurricane Andrew cut a path of destruction south of Miami, Karon Grunwell is still overcome with sadness when she thinks about how the Category 5 storm forever changed her hometown.

In 1992, Homestead was a sleepy agricultural town bordered by the Everglades and large farms planted with winter tomatoes and other crops. It was also the site of Homestead Air Force Base. Now Homestead is full of sprawling gated developments where many residents commute 40 miles (60 kilometers) north to Miami with no memory of the monster storm.

Grunwell still lives in the sturdy concrete block home where she and her family rode out the storm in the early morning darkness of Aug. 12. Thousands of homes and businesses in the town of about 27,000 were leveled.

“The Air Force base was totally destroyed. Andrew caused a major impact to schools, grocery stores, retail businesses. And it caused huge economic problems for just your everyday people,” Grunwell said. “The vegetation has come back, but it’s not anything like it was.”

“I still cry when I talk about it,” she said.

Families who had lived in the area for generations got their insurance payouts and moved away. Many went to neighboring Broward County. Grunwell, who was a manager for the Postal Service, said there were 35,000 change-of-address forms processed for the towns of Homestead, nearby Florida City and Princeton.

“As I went home in the evenings, I remember seeing a solid line of cars heading north,” Blakley said. “It was bumper-to-bumper, and it was heartbreaking because you would see cars with everything they owned. Stuff was coming out the windows and mattresses were strapped to the roof. And they were just leaving because the devastation was so horrific.”

The Air Force base was downsized, its population going from 5,123 before Andrew to 466 in 2000. The storm stunted Homestead’s growth rate in the 1990s, but it surged in the early 2000s as land sold by departing farmers was transformed into housing developments. The town now has about 70,000 people.

But for hurricane survivors, “the stuff will not go away for quite some time,” Grunwell said. “You will keep remembering how things were.”

Thomas Lee tenses up whenever a forecaster mentions trouble in the tropics.

When the first drops of rain from Florence fell last September, Lee considered leaving. But exactly 238 days later, he put the last coat of bright yellow paint on his walls, covering the 2018 high-water mark, several inches above the 2016 line. Some $13,000 later — all out of his own pocket for now — his house is home again, while the town of a few hundred souls struggles to stay alive.

“These are my roots,” Lee said, pointing to a nearly collapsed structure next door where he was born in 1949.

Nichols, 45 miles (72 kilometers) from the sea, lost more than half its businesses and a third of its homes in 2016 and shrank some more after 2018, Town Administrator Sandee Rogers said. Along Nichols’ two-lane main drag, every building is boarded up. Many houses abandoned in 2016 are collapsing. Its bustling core gone, Nichols now tries to attract residents with its proximity to the coast, Rogers said.

Some research suggests global warming is increasing the intensity of rains across the Southeast. A $1.5 million federal grant will study Nichols’ topography and flow to see how to prevent flooding, but the results won’t be in in time to make any difference this season.

Siblings Patty and John Vogt remember brisk traffic on Louisiana Highway 23 that brought oilfield workers to their roadside produce business. Grocery stores and farmers markets were regular customers for the citrus they grew in Plaquemines Parish.

“Our business was really blooming,” Patty recalled as she sat next to her brother in a cavernous red barn behind their produce stand and next to a small orchard. “We had a lot of customers. We delivered to wholesalers, fruit stands, stores.”

Then came Hurricane Katrina in 2005. It blew ashore in Plaquemines Parish on its way to New Orleans, where it caused a catastrophe.

In its aftermath, Patty managed to salvage and rebuild the 60-foot (18-meter) contraption that washes, rinses and dries their harvest. But their citrus business never fully recovered. She once tended 5,000 trees. Now, it’s about 1,000. The 200 citrus producers in Plaquemines before Katrina hit dwindled to 60 by 2017, according to the Louisiana State University AgCenter.

Patty, 65, said she is determined to continue their family business of four generations but always frets when hurricane season nears.

“Everybody does that’s been totally wiped out,” said Patty, whose business has also been hurt by drop-offs in customers as a result of low oil prices and the 2010 BP oil spill in the Gulf of Mexico.

John, 68, reminisced about the competition at the annual parish Orange Festival. “There used to be eight, 10, maybe 12 vendors at one time selling oranges,” he said.

“Now, you got one,” the brother and sister said, almost in unison. “Us.”