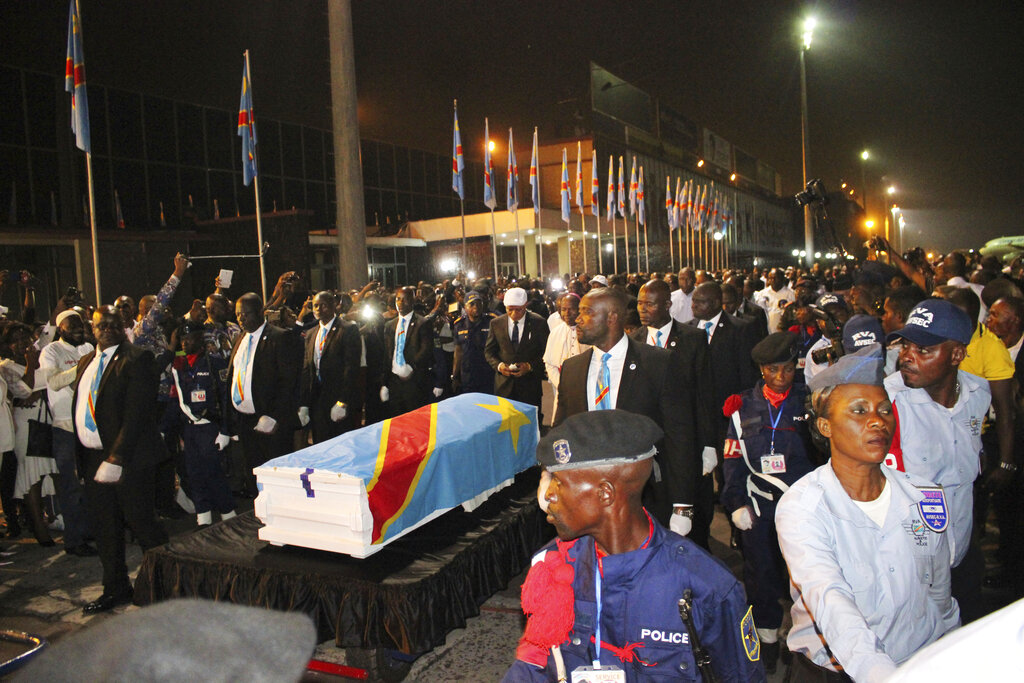 The coffin carrying the remains of longtime Congolese opposition leader Etienne Tshisekedi arrives at Kinshasa airport May 30, 2019. The body of Tshisekedi, father of the current Congolese President Felix Tshisekedi, died in Brussels in February 2017, was returned to home soil Thursday night for burial more than two years after his death, after a political standoff ended. (JOHN BOMPENGO/Associated Press)

The coffin carrying the remains of longtime Congolese opposition leader Etienne Tshisekedi arrives at Kinshasa airport May 30, 2019. The body of Tshisekedi, father of the current Congolese President Felix Tshisekedi, died in Brussels in February 2017, was returned to home soil Thursday night for burial more than two years after his death, after a political standoff ended.

KINSHASA, Congo — Opposition icon Etienne Tshisekedi, whose son is now Congo’s president, was laid to rest Saturday in his homeland more than two years after he died during a political stalemate over the country’s long-delayed elections.

A funeral procession joined by thousands made its way to the outskirts of Kinshasa following several days of tributes to the man who was the face of Congo’s opposition for decades but died before his political nemesis agreed to step aside and allow a new presidential vote to go forward.

In life, Tshisekedi was at times put under house arrest and his supporters jailed. But on Saturday the 84-year-old received a farewell befitting a former leader now that his son, Felix, holds the presidency in this sprawling Central African nation.

Tens of thousands greeted his casket as it was driven through the streets of the capital Thursday evening and then displayed at Martyrs Stadium the following day. Even the political coalition of his lifelong adversary, former President Joseph Kabila, issued a statement calling Tshisekedi “undoubtedly one of the major political actors of our country.”

At the time of his 2017 death in Brussels, family members say Kabila had blocked the return of his body to Congo for fear it could foment unrest and more calls for his ouster.

Tshisekedi was one of the most outspoken critics of Kabila, at one point accusing him of treason for not stepping down when his mandate ended. Kabila eventually allowed elections to be held in January, which Felix Tshisekedi won.

It took the hearse seven hours to reach its destination in Kinshasa on Thursday night as throngs of supporters took to the streets.

“I’m sorry that his body had to stay two years abroad but today we are showing our commitment to him still,” Georgette Lobota said as she sold bread at the sports stadium where Tshisekedi’s body lay in state Friday, dressed in fabric with his image. “He will finally be honored as a dignified son of Congo.”

On Saturday, Mass was celebrated and then he was interred at a mausoleum 18 miles from Kinshasa during a private ceremony with family members.

He went into exile in 2000 after repeated clashes with the government of Joseph Kabila’s father, Laurent, who became president after Mobutu’s departure and then was assassinated in 2001.

At one point, Tshisekedi was banished to internal exile in his home village 435 miles west of the capital but he made a triumphant return in 2003.

His international prominence grew in 2011, when he declared himself president after an election marred by allegations of vote-rigging by the ruling party. He was placed under de facto house arrest but later left for Belgium to get medical treatment.

Tshisekedi kept up his criticism until the end, at one point accusing Kabila of a “coup d’état that was carried out with the blessing of the constitutional court.”

Kabila’s government, under international pressure, eventually cleared the way for an election after 18 years in power, although Felix Tshisekedi’s victory early this year was disputed. Another opposition candidate, Martin Fayulu, maintains that he won.