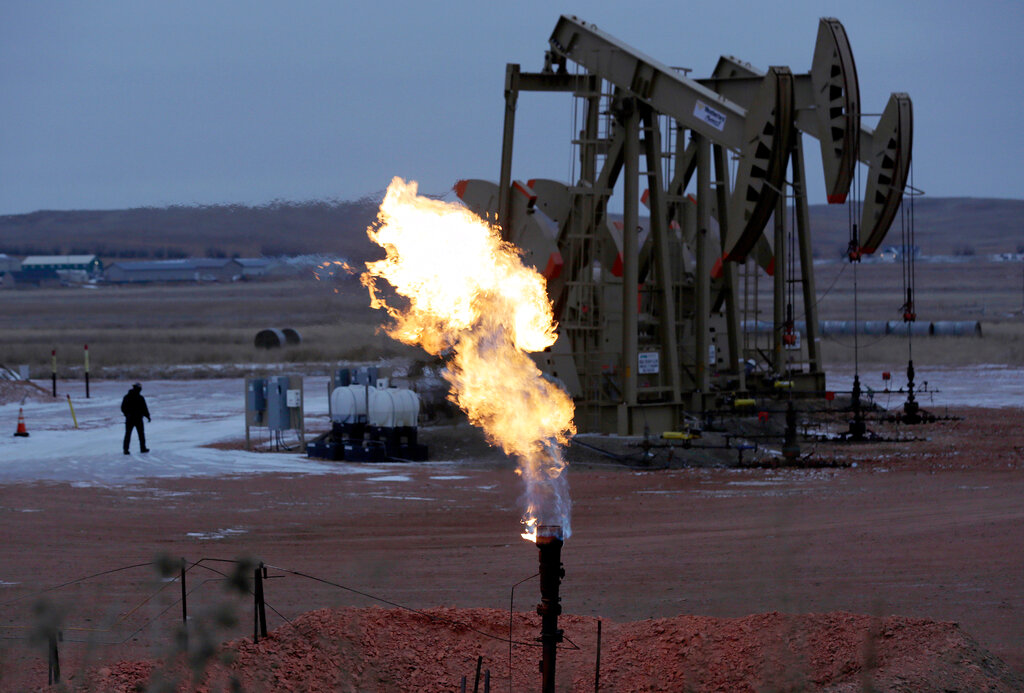 In this Oct. 22, 2015 file photo, workers tend to oil pump jacks behind a natural gas flare near Watford City, N.D., about an hour from the Fort Bethold reservation. (ERIC GAY/Associated Press )

In this Oct. 22, 2015 file photo, workers tend to oil pump jacks behind a natural gas flare near Watford City, N.D., about an hour from the Fort Bethold reservation.

FARGO, N.D. — For nearly two centuries, the federal government has repeatedly assured a Native American tribe in North Dakota that it has rights to a reservation river. The issue stayed relatively quiet, until oil companies figured out a way to drill under the waterway, which is now a man-made lake.

With an estimated $100 million in oil royalties waiting in escrow to be claimed and future payments certain to come, the state has become more involved in seeking ownership rights. It successfully lobbied the U.S. Interior Department to suspend a last-minute Obama-era memo stating that mineral rights under the original Missouri River bed should belong to the Mandan, Hidatsa and Arikara Nation, which is also known as the Three Affiliated Tribes.

The Interior Department put the minerals issue on hold last summer and ordered a review of the “underlying historical record.” The state maintains it assumed ownership of the riverbed when North Dakota became a state in 1889, citing a constitutional principle known as the equal footing doctrine.

The state’s immersion in the issue isn’t sitting well with tribal members, who say it’s between them and the Trump administration.

“They obviously didn’t care that much before,” the tribal chairman, Mark Fox, recently told The Associated Press. “Now that there might be $100 million there, all of a sudden the state really cares, right?”

The January 2017 memo by former Interior Department Solicitor Hilary Tompkins, an enrolled member of the Navajo Nation, is one of numerous federal declarations since the 1820s that has confirmed the tribes’ ownership of the river, which was altered when the U.S. Army Corps of Engineers built the Garrison Dam in the 1950s and created Lake Sakakawea.

In her ruling, Tompkins cited both a 1936 opinion by the Interior Department that granted the tribes ownership of a Missouri River island and a wider-ranging 1979 conclusion by the Interior Board of Land Appeals that the entire bed of the river within the reservation boundaries didn’t pass to North Dakota’s control when it became a state. The state didn’t appeal the 1979 decision, which Tompkins said rejected the relevance of the equal footing doctrine.

Tribal officials have recently taken to social media and penned op-eds asking state leaders to come out in support of the tribes’ ownership rights, much like they did during the last legislative session regarding an oil and tax agreement with the tribes.

“I hope our elected officials will join us once again in supporting our lawful property rights to the minerals under the Missouri River on the Fort Berthold Reservation,” Fox wrote in an op-ed kicking off the campaign.

The opinion by Tompkins, who said her conclusions are backed by a 2001 Supreme Court opinion giving an Idaho tribe ownership of submerged lands, came out two days before President Donald Trump’s inauguration. Although Trump held a meeting later that year to pledge his support to Native American leaders in oil country, including Fox, state government officials in Republican-dominated North Dakota have found receptive ears at the Interior Department.

State Attorney General Wayne Stenehjem wrote a letter in October 2017 to James Cason, associate deputy secretary in the Interior Department and longtime conservative operative, stating the Tompkins opinion has flaws and asking that it be withdrawn or suspended.

“I wholeheartedly support a ‘re-set’ and encourage discussions that have as their objective an amicable resolution to the title question,” Stenehjem wrote.

Principal Deputy Solicitor Daniel Jorjani complied with that request in June 2018, after which the National Congress of American Indians passed a resolution urging the Interior Department to complete title and mapping work of the riverbed and scrap Jorjani’s opinion.

Stenehjem told the AP that Fox’s op-ed focusing on strong relationships between tribal and state governments should be a “means to resolve any of these issues.” Asked if that meant sharing some of the royalties, the attorney general said, “Conceivably, yes.” He added that those conversations would go through Republican Gov. Doug Burgum.

Burgum’s spokesman, Mike Nowatzki, said in a statement that Burgum is committed to partnering and engaging in productive dialogue with “all tribal nations for the benefit of all North Dakotans,” but added that any public statements on the riverbed minerals issue would be premature. The Interior Department did not respond to requests for comment.

We have a connection to the river that goes back thousands of years … It’s not just cultural, it’s not only spiritual, it has also historically been our economic foundation of who we are.”

Fox said tribal elders have told him to “fight and fight hard for what our people died for over hundreds of years.” He said he believes it’s his responsibility to right some of the wrongs, including “one of the greatest devastating blows to our people” — the construction of Garrison Dam.

“We have a connection to the river that goes back thousands of years,” Fox said. “It’s not just cultural, it’s not only spiritual, it has also historically been our economic foundation of who we are.”

Fox said the tribes have spent their oil money wisely. He cited a new courthouse, $130 million worth of road repairs, construction of more than 400 homes, a new drug treatment facility, health insurance for 7,000 enrolled members, improvements in law enforcement, a $20 million education fund for students, and $200 million in infrastructure upgrades, among other things.

Tribal elder Austin Gillette, 72, who was in first grade when his town of Elbowoods was flooded out by Lake Sakakawea, and 90 percent of reservation residents were forced to relocate, remembers it as the first time he saw adults cry.

“Water is life,” said Gillette, a former tribal chairman and council member. “We just want the state to go away on this issue.”