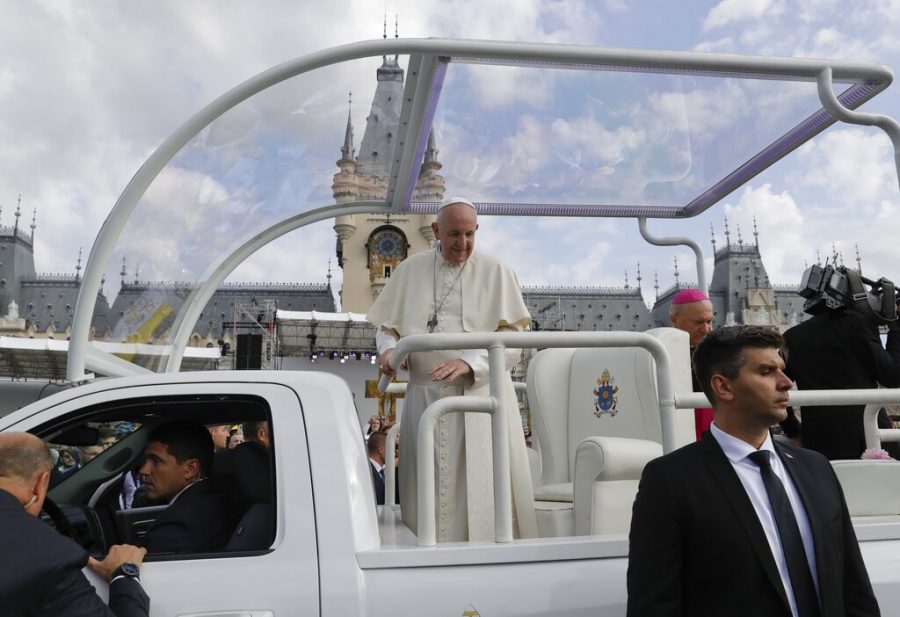 Pope Francis arrives for a meeting with families, in front of the Palace of Culture in Iasi, Romania, on Saturday, June 1.

MIERCUREA CIUC, Romania — Pope Francis braved a rain-soaked, twisting drive through the mountains of Transylvania on Saturday to visit Romania’s most famous shrine. He urged Romanian and ethnic Hungarian faithful to work together for their future.

Storms forced Francis to change his travel plans and add in a three-hour car ride through the Carpathian mountains that he had planned to travel via helicopter. The steady rains doused the estimated 80,000-100,000 people who gathered for the Mass at the Sumuleu Ciuc shrine, which is dedicated to the Virgin Mary.

Complicated and sorrow-filled situations from the past must not be forgotten or denied, yet neither must they be an obstacle or an excuse standing in the way of our desire to live together as brothers and sisters.”

The showers let up as Francis arrived, and he made a quick run through the poncho-clad crowds in his popemobile. But the 82-year-old seemed unsteady after the long trip and held onto the arms of aides as he negotiated a mud-slicked path to get to the altar for Mass.

In his homily, Francis praised Romania for its multicultural and multilingual people but urged listeners to put aside past divisions for the sake of “journeying together.”

The rights of around 1.2 million ethnic Hungarians who live in Romania have been at the center of political disputes between the two countries for decades. Hungary lost Transylvania in the peace treaties after World War I yet the region remains heavily Hungarian in both culture and language.

Those tensions are often reflected in the uneasy relationship between the predominantly Hungarian Roman Catholic community and the Romanian-speaking Greek-Catholic communities. The two rites make up Romania’s Catholic minority in the overwhelmingly Orthodox country.

“Complicated and sorrow-filled situations from the past must not be forgotten or denied, yet neither must they be an obstacle or an excuse standing in the way of our desire to live together as brothers and sisters,” Francis said.

The pope delivered the homily in Italian, and it was translated into Romanian and Hungarian.

After Mass, with the weather improved, Francis was able to fly by helicopter back to the airport for a flight to another corner of Romania, the university city of Iasi in the northeast. There he had an appointment with young Romanians and their families.

“It is a joy, it is a joy,” said 71-year old Elisabeta Balan, the mother of 11 children who was among those chosen to address the pope in Iasi. “We are very happy that he comes in Iasi; and for this occasion, we succeeded in bringing our big family together.”

Francis was traveling across Romania to visit its far-flung Catholic communities. His trip aimed to complete the journey St. John Paul II began in 1999, where he was only allowed to visit the capital, Bucharest, in the first papal visit to a majority Orthodox country.

On Sunday, Francis travels to the Greek-Catholic stronghold of Blaj to meet with people from the disadvantaged Roma minority. He also plans to beatify seven bishops who were martyred during a brutal period of communist persecution in Romania, then return to Rome. 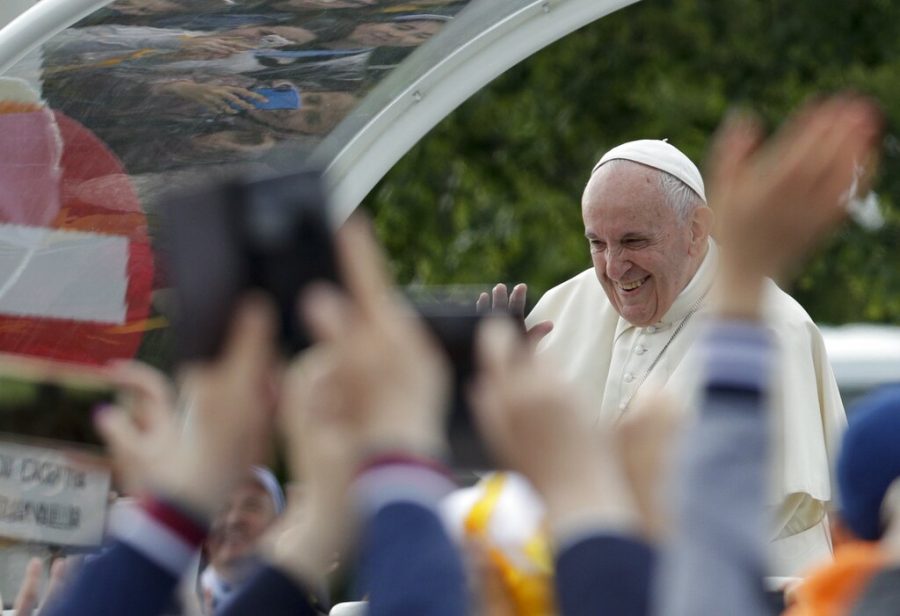 Gallery|18 Photos
Andrew Medichini/AP Photo
Pope Francis waves to the crowd as he arrives for a meeting with young people and families, in Iasi, Romania on Saturday, June 1.
(Visited 20 times, 1 visits today)
Leave a Comment