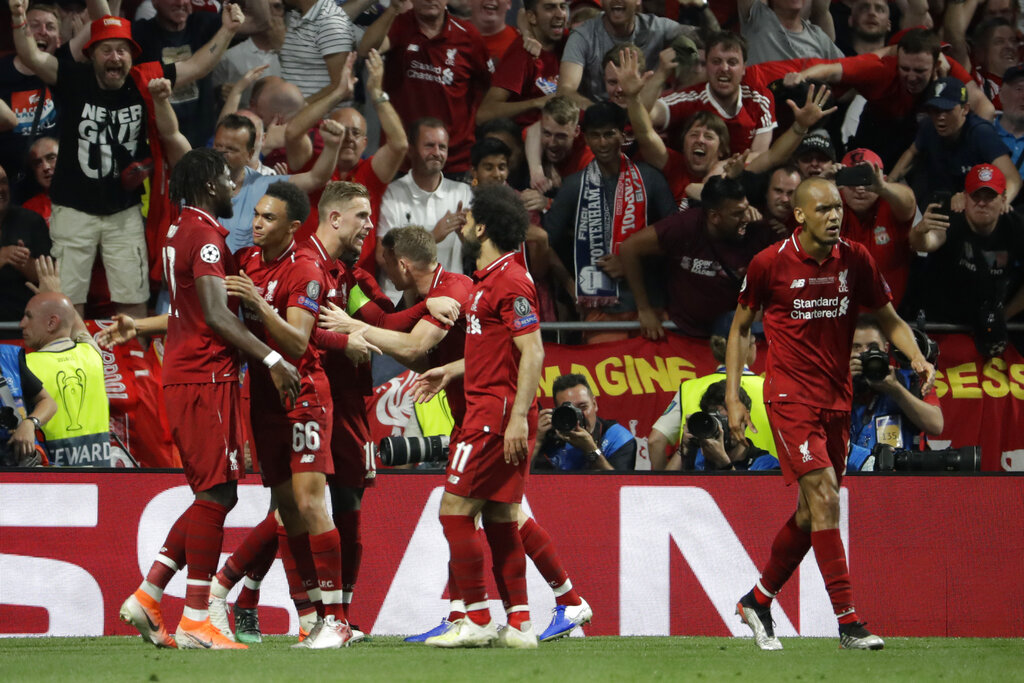 Liverpool’s Divock Origi, left, celebrates with his teammates after scoring his side’s second goal during the Champions League final between Tottenham Hotspur and Liverpool on Saturday at the Wanda Metropolitano Stadium in Madrid. (Felipe Dana/Associated Press)

Liverpool’s Divock Origi, left, celebrates with his teammates after scoring his side’s second goal during the Champions League final between Tottenham Hotspur and Liverpool on Saturday at the Wanda Metropolitano Stadium in Madrid.

MADRID — No tears of pain this time, just redemption for Mohamed Salah.

Only 108 seconds were needed to banish the Champions League final heartbreak of a year ago.

Once Salah dispatched his early penalty against Tottenham, Liverpool was on the path to a sixth European title with a 2-0 victory on Saturday.

And a year after defeat in the final to Real Madrid, Juergen Klopp has his first title after four years as Liverpool manager.

A shoulder injury forced Salah out of the Kiev showpiece last year.

This time it was Tottenham midfielder Moussa Sissoko’s arm that gifted Liverpool the early penalty opening — blocking Sadio Mane’s shot after 21 seconds — and Salah converted from the spot after a video review check.

“I have sacrificed a lot for my career,” Salah said. “To come from a village, to go to Cairo, and to be an Egyptian at this level is unbelievable for me.”

On a hot and humid night in Madrid, Tottenham came to life only in the final 20 minutes of its first European Cup final.

But Liverpool completed the job in the 87th minute thanks to one of its semifinal saviors.

Divock Origi had to accept a place back on the bench despite producing two goals while deputizing for the injured Salah last month. But the substitute had the final big say in the Spanish capital, rifling a left-footed shot inside the far post.

After two losing finals since triumphing in 2005, Liverpool finally rose to third in the all-time list of European champions behind 13-time winner Real Madrid and AC Milan on seven titles.

Few fans — even from Liverpool — will want to watch just how it was achieved.

Both sides had gone three weeks without playing. It showed.

The sharpness was deficient, as was the ability to string passes together.

“When we look back on tonight we aren’t going to think it was a sluggish game,” Liverpool-born defender Trent Alexander-Arnold said. “We are going to think we have just won the European Cup.”

Tottenham will have only regrets as its luck run out after a season of comebacks and great escapes in the competition with a squad that had no additions.

“A little bit unlucky,” said Mauricio Pochettino, who remains without a trophy in management. “To start a Champions League final from the start 1-0 it’s a tough situation, it changed completely the plan.”

Lucas Moura’s goal in Barcelona in December carried Tottenham into the round of 16. The Brazilian’s hat trick last month then completed a turnaround against Ajax. The reward in Madrid was a watching brief from the bench for two thirds of the game.

Instead, Harry Kane was thrust into the starting lineup despite 53 days without a game since limping off with an ankle injury in the quarterfinal first leg against Manchester City.

The striker was largely anonymous as Tottenham, which finished 26 points behind Premier League runner-up Liverpool in fourth place, couldn’t even get a shot on target until the 73rd minute.

Alisson Becker scooped up a spinning shot from Dele Alli and made a double-save from Son Heung-min and Moura with 10 minutes to go.

“We should have put more craziness in our performance,” Tottenham goalkeeper Hugo Lloris said. “It took too much time to put Liverpool in difficulty.”

It was Liverpool’s goalkeeping that made the difference, showing $85 million was well spent on Alisson by American owner John Henry after Loris Karius was banished for making costly mistakes in last year’s final.

“You have a goalkeeper who makes difficult things look easy,” Klopp said. “Thank you very much.”

No wonder Klopp was relieved after six losing finals, stretching back to his spell at Borussia Dortmund.

“Did you ever see a team like this? Fighting with no fuel in the tank,” the German said.

Victory against Tottenham came six years after Dortmund was beaten by Bayern Munich in the Champions League final.

Klopp is now European champion for the first time.

“I am so happy for my family,” he said. “They suffer every year when we go to a final, the last game of the season.”

The penultimate game saw Klopp miss out on ending Liverpool’s 29-year English title drought by a point to Manchester City in the Premier League title race.

“We are doing good stuff,” Klopp said on the field amid the celebrations in Madrid. “People are always saying, ‘Why didn’t you win anything?'”

They can’t anymore at Liverpool.