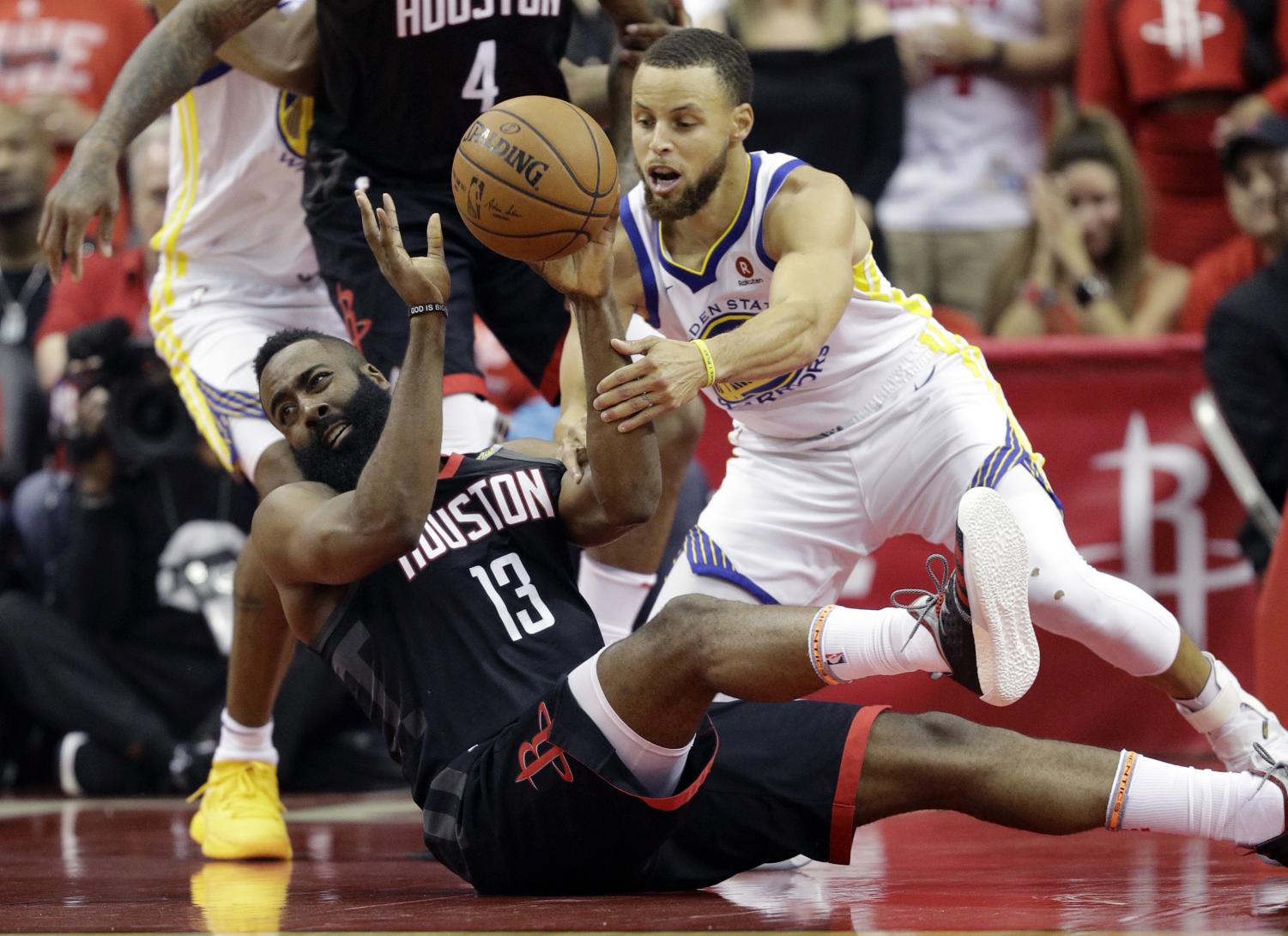 Houston Rockets guard James Harden (13) and Golden State Warriors guard Stephen Curry (30) scramble for a loose ball during the first half in Game 7 of the NBA basketball Western Conference finals, Monday, May 28, in Houston.

The Rockets have to figure out what it will take to get over the hump next year.

HOUSTON — The Houston Rockets were up by 14 in the second quarter against the Golden State Warriors when they started missing from 3-point range. They shot themselves all the way from prime position to advance to the NBA Finals to the end of a solid season.

James Harden was the first to miss. Eric Gordon soon bricked one, and P.J. Tucker did the same. It was miss after miss after miss as the cold streak stretched to nine by halftime. There were 14 more in the third quarter in a surprising performance for a team that relied on the 3 all season. By the time Tucker connected with about 6 1/2 minutes left, the Rockets had missed an NBA-record 27 straight 3-pointers and the Warriors were on their way to a 101-92 victory.

Though Gordon believes the result would have been different if Houston had Chris Paul for the last two games of the Western Conference finals. “If he was out there, we’d have been playing on Thursday,” he said. The rest of the Rockets agreed that even the nine-time All-Star probably couldn’t have changed things on a night their shooting was historically bad.

Who do you want to win in the NBA finals? #NBAFinals #Cavaliers #Warriors

The Rockets led the NBA by making an average of 15.3 3-pointers on their way to a franchise-record 65 wins in their second year in coach Mike D’Antoni’s high-octane offense. The team made it to the conference finals for the first time since 2015, but was unable to overcome its worst shooting game of the postseason.

“The first half, just our energy defensively was different. That created more opportunities for the 3 and they went in,” Harden said. “As a result of that, we got a double-digit lead going into halftime. Those same opportunities were there in the second half, we just didn’t make them. They made tough shots. That’s it pretty much.”

It was a bitter end to a sweet year for Houston.

Harden turned in an MVP-caliber regular season to help the Rockets get the NBA’s top seed for the first time in franchise history. Many doubted that he would play well with Paul after the point guard was acquired in a trade with the Clippers. But the two meshed nicely and helped the Rockets to a 3-2 lead in the conference finals before Paul’s season ended with a hamstring injury in Game 5.

Now the Rockets have to figure out what it will take to get over the hump next year. They have some big decisions to make with Paul, Ariza and center Clint Capela eligible for free agency. Some believe Houston could make a run at LeBron James if he chooses to leave Cleveland, but the Rockets would have to make a lot of changes to their roster to be able to afford him.

D’Antoni didn’t want to get into what he thinks general manager Daryl Morey should do with the roster to improve this offseason.

“It’s way too early. That’s Daryl’s department,” he said. “I love each guy. So it’s hard to even be objective, me to be objective. That’s the upstairs. That’s their job to be cold and objective, and do what they think is best for the team. Then once we get in the trenches, I’ll be happy with whoever we’ve got.”

But he knows the Warriors will continue to be the league’s benchmark and they’ll have to figure out a way to beat them if they hope to win a championship.

“Golden State has set the bar for the whole league, not just us. We know where we have to go,” he said. “We feel like we’re really close …  so I’m obviously optimistic because of the guys we’re dealing with, and they’re winners. You keep knocking on the door, and they’ll eventually open.”