Palestinians watch two fishing boats sail carrying 20 people, including medical patients and students unable to leave through overland crossings, leave port in Gaza City, Tuesday, May 29. Palestinian activists have set sail in defiance of years of an Israeli and Egyptian naval blockade on the Gaza Strip.

JERUSALEM — Palestinian militants bombarded southern Israel with dozens of rockets and mortar shells early Tuesday morning, while Israeli warplanes struck targets throughout the Gaza Strip in the largest flare-up of violence between the sides since a 2014 war.

The Israeli military said most of the projectiles were intercepted, but three soldiers were wounded, raising the chances of further Israeli retaliation. One mortar shell landed near a kindergarten shortly before it opened.

The sudden burst of violence follows weeks of mass Palestinian protests along the Gaza border with Israel. Over 110 Palestinians, many of them unarmed protesters, have been killed by Israeli fire in that time. Israel says it holds Gaza’s Hamas rulers responsible for the bloodshed.

Israel will exact a heavy price from those who seek to harm it, and we see Hamas as responsible for preventing such attacks.”

“Israel will exact a heavy price from those who seek to harm it, and we see Hamas as responsible for preventing such attacks,” Israeli Prime Minister Benjamin Netanyahu said.

The Israeli military said it carried out over 35 airstrikes on seven sites across Gaza, including an unfinished tunnel near the southern city of Rafah that crossed under the border into Egypt and from there into Israeli territory. No Palestinian casualties were reported.

Palestinian militants continued to fire additional barrages toward southern Israel, setting off air raid sirens in the area throughout the day and into the evening.

They said Israel “began this round of escalation” by targeting their installations in the past two days, killing four militants. It was the first time the armed wing of Hamas has claimed responsibility for rocket attacks out of Gaza since the 2014 war.

In southern Israel, angry residents complained about the renewed rocket fire. Adva Klein of Kibbutz Kfar Aza said she only got about two hours of sleep because of the frequent incoming fire and the warning sirens. Other residents reported machine-gun fire from Gaza. “It’s been a really scary morning,” said Adele Raemer of Kibbutz Nirim.

The European Union’s foreign policy chief, Federica Mogherini, called for an immediate halt to the rocket and mortar fire. “Indiscriminate attacks against civilians are completely unacceptable under any circumstances,” she said.

Israel has rejected the criticism of its response to the protests, saying it is defending its border and nearby communities. It accuses Hamas of trying to carry out attacks under the cover of protests and using civilian demonstrators as human shields. Hamas has vowed to continue the border rallies. 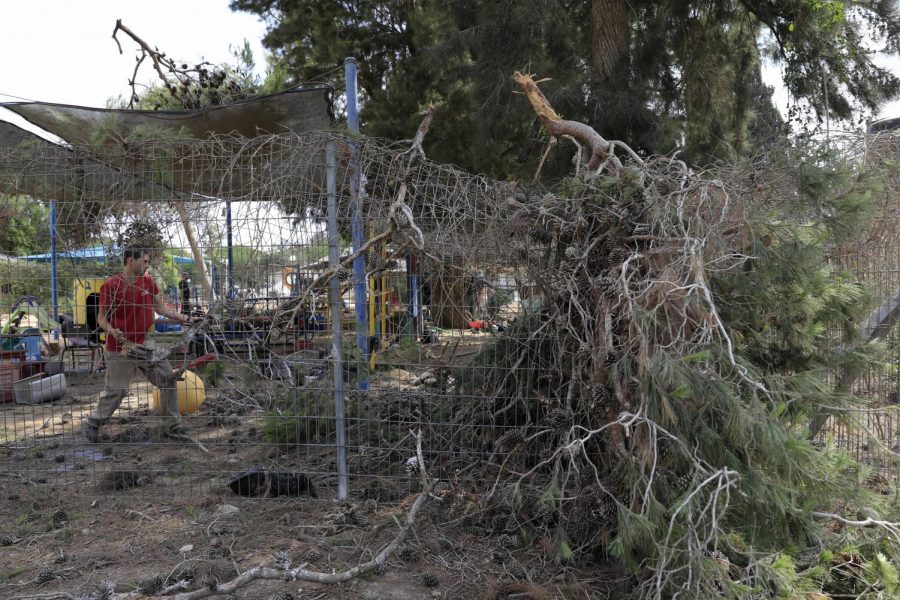 Gallery|7 Photos
Tsafrir Abayov / Associated Press
A man clears trees damaged by mortar shells fired from the Gaza Strip in a kindergarten at a kibbutz near the Israel-Gaza border, Tuesday, May 29.
(Visited 16 times, 1 visits today)