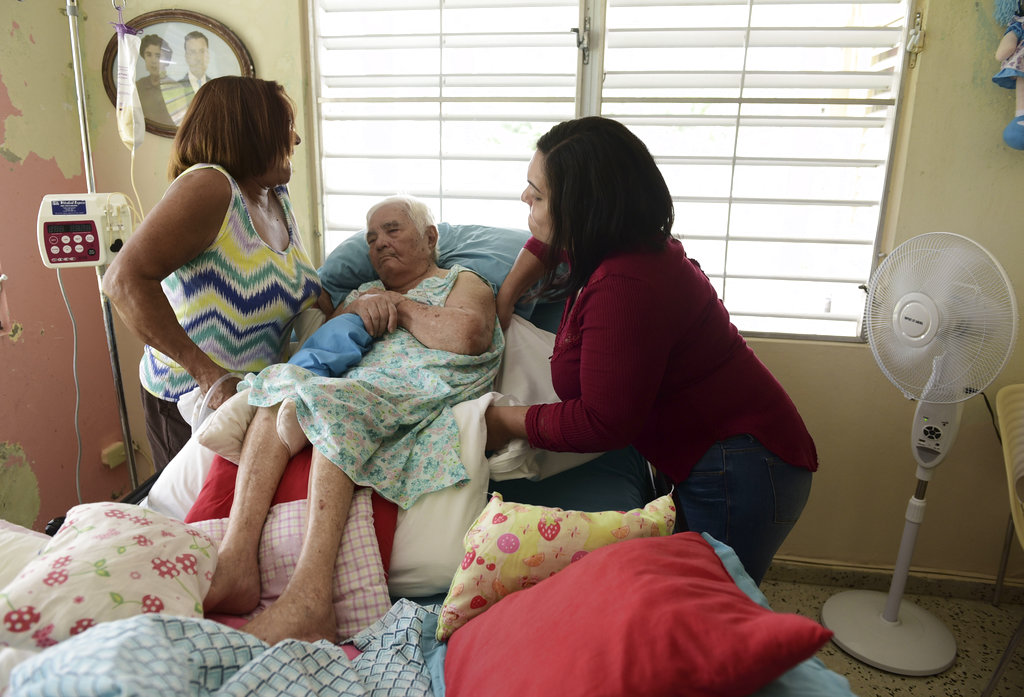 Norma Medina, left, and a caregiver, move her elderly mother Tomasa Silva in Yabucoa, a town where many still live without power in Puerto Rico. Silva suffers Alzheimer’s, diabetes and heart issues, requiring electricity to power her oxygen machine and IV, which they resolve with a generator. (AP Photo/Carlos Giusti) (Carlos Giusti / Associated Press)

Norma Medina, left, and a caregiver, move her elderly mother Tomasa Silva in Yabucoa, a town where many still live without power in Puerto Rico. Silva suffers Alzheimer’s, diabetes and heart issues, requiring electricity to power her oxygen machine and IV, which they resolve with a generator. (AP Photo/Carlos Giusti)

Researchers calculated that 4,645 more people died in the three months after Maria compared with the same period in 2016, as opposed to the 64 the government released in an official death count.

SAN JUAN, Puerto Rico — A new study contends that many more deaths than normal occurred in Puerto Rico in the three months after Hurricane Maria devastated the island on Sept. 20, 2017, mostly because of problems getting medicines or medical care.

Researchers led by Harvard University surveyed a small sample of neighborhoods, and from that estimated that up to 4,600 more deaths than usual occurred, far more than earlier studies have suggested. At least one independent expert questioned the methods and the number in the new study.

“This estimate could be off by thousands. Easily,” Donald Berry, a professor of biostatistics at the University of Texas MD Anderson Cancer Center, told The Associated Press in an email.

The research was published online in the New England Journal of Medicine. It’s the latest study to analyze how many people died during or after the Category 4 storm that hit the U.S. territory, causing more than an estimated $100 billion in damage. Researchers in the study called the official toll of 64 deaths a “substantial underestimate.”

Maria caused the longest blackout in U.S. history, leaving the entire island of 3.3 million people without power, including those in hospitals and nursing homes who relied on respirators. Researchers surveyed 3,299 households earlier this year and used the findings to extrapolate to the whole island. They found that 31 percent reported disruptions in medical services, and more than 14 percent said they were unable to access medications.

This estimate could be off by thousands. Easily”

“Indirect deaths resulting from worsening of chronic conditions or from delayed medical treatments may not be captured on death certificates,” researchers said in the study.

They calculated 4,645 more people died in the three months after Maria compared with the same period in 2016. One of the researchers, Rafael Irizarry of Harvard University, told the AP that the estimate is uncertain because of its limited size, but that the study still provides valuable information, including how some people died.

Previous studies have found that the number of direct and indirect hurricane-related deaths in Puerto Rico is higher than the official toll, including a 2017 report that there were nearly 500 more deaths than usual on the island in September.

In late February, Puerto Rico’s governor announced that a team of experts at George Washington University would lead an independent review to determine the number of deaths caused by Hurricane Maria amid ongoing accusations that the government undercounted the toll. A preliminary report was due in May, but Puerto Rico officials announced last week that the team requeste

d and was granted more time. The director of that study did not return messages for comment.

The government of Puerto Rico issued a statement Tuesday in response to the study saying that it welcomed the research and would analyze it.

“As the world knows, the magnitude of this tragic disaster caused by Hurricane Maria resulted in many fatalities. We have always expected the number to be higher than what was previously reported,” said Carlos Mercader, executive director of Puerto Rico’s Federal Affairs Administration. 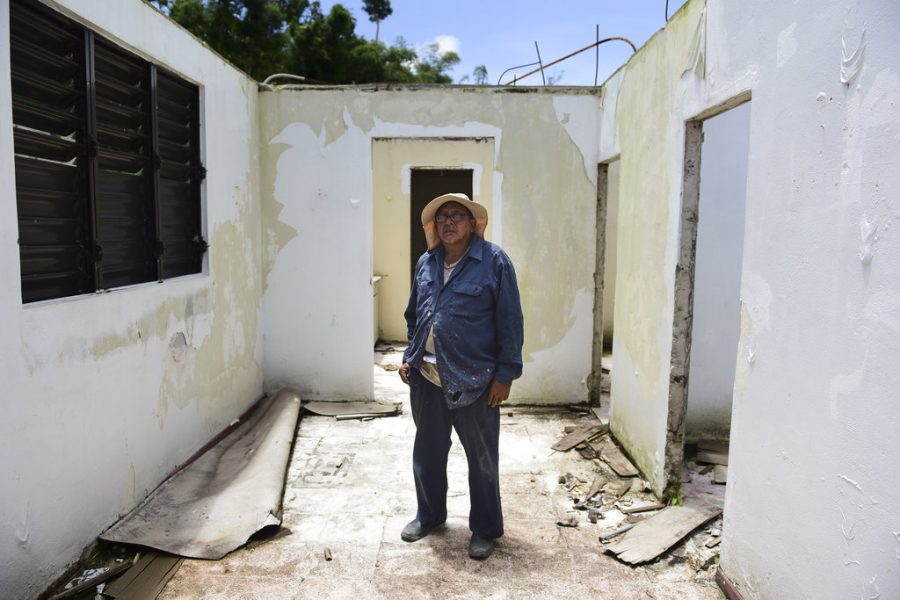 Gallery|3 Photos
Carlos Giusti / Associated Press
Tinsmith Otoniel Ramos Aponte poses for a portrait inside his mother's home, which lost its roof to Hurricane Maria but did not qualify for federal aid for repair in Yabucoa, a town where many continue without power in Puerto Rico. The Army Corps of Engineers is ending its work to rebuild Puerto Rico's electric grid despite fears the island's government won't be able to restore power on its own to more than 16,000 people who remain blacked out eight months after the storm.
(Visited 17 times, 1 visits today)
Leave a Comment