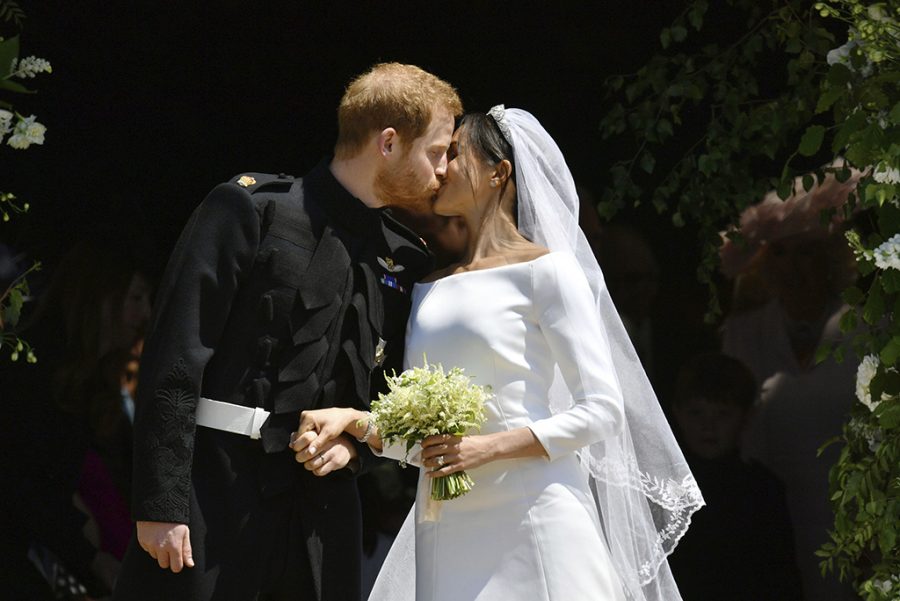 Prince Harry and Meghan Markle leave after their wedding ceremony at St. George’s Chapel in Windsor Castle in Windsor, near London, England, Saturday, May 19, 2018.

Royal wedding: Prince Harry and Meghan Markle say ‘I do’

WINDSOR, England — The son of British royalty and the daughter of middle-class Americans wed Saturday in a service that reflected Prince Harry’s royal heritage, Meghan Markle’s biracial roots and the pair’s shared commitment to putting a more diverse, modern face on the monarchy.

All about that dress

Clare Waight Keller of Givenchy, a surprise choice whose name wasn’t among the designers slated to be contenders in the dress commission of the year. After stints at Gucci, Pringle and Chloe, she was appointed as artistic director of Givenchy haute couture and women’s and men’s ready-to-wear last year.

The dress featured no lace or embroidery, carrying a classic boat neckline, three-quarter length sleeves and an A-line skirt with a train measuring nearly 6 feet from the waist. Kensington Palace said Markle wanted a dress with an “elegant aesthetic, impeccable tailoring, and relaxed demeanor.”

What’s on that veil?

The veil carried floral references to all 53 countries in the Commonwealth, the group of countries that roughly corresponds to the former British Empire and is headed by the queen. Markle also selected two other plants: Wintersweet and, in a nod to her birthplace, the California poppy.

What about the tiara?

Markle’s tiara was a diamond bandeau made for Queen Mary and specifically designed to accommodate the central brooch, given as a gift to the then-Princess Mary in the late 19th century and passed on to Markle’s new grandmother-in-law, Queen Elizabeth II  in 1953.

British reserve crisscrossed with American verve in a service that broke molds and created new ones. Choirboys and a gospel choir; the archbishop of Canterbury and the African-American leader of the Episcopal church; a horse-drawn carriage and flowers hand-picked by the groom.

The wedding was a global event, thanks to Harry’s status as a senior British royal and Markle’s celebrity after starring on the U.S. TV series “Suits” for seven years. Yet it seemed somehow so personal — and they both beamed like a couple who couldn’t take their eyes off each other.

In a rousing sermon that highlighted a bit of a culture gap between outgoing Americans and reserved Brits, the Most. Rev. Michael Curry of the U.S. stirred the congregation from its fairy-tale reverie, quoting Martin Luther King in in a sermon that had some reaching for hankies and others shifting in their chairs.

Joining the couple were a phalanx of celebrities, many of whom shared their wish to change the world. Oprah Winfrey, Idris Elba, Elton John, George and Amal Clooney, Serena Williams, James Corden and David and Victoria Beckham all watched from rows of seats in the Gothic masterpiece that is St. George’s Chapel at Windsor Castle.

The British weather was — gasp! — sunny and balmy, bathing the ancient stones of Windsor Castle in a beautiful spring light.

Many in the throng who waited outside also embraced the trans-Atlantic symbolism of the moment. Sheraton Jones, 22, who is from California but studying in Britain, described it as a melding of cultures.

“It was very touching, it’s two different cultures kind of coming together, it was just so surreal,” she said.

In the United States, this royal wedding was embraced for its diversity and inclusivity.

“This was black history,” said Joy Widgeon, who attended a house party in Burlington, New Jersey, with her 6- and 8-year-old daughters. “African-Americans were front and center at the royal wedding. This was the first time, and hopefully it won’t be the last. I am here for it.”

Harry also invited buddies from his 10 years of military service — which included two tours of duty in Afghanistan — and from many of the charities he supports, which have focused on helping wounded veterans and encouraging a more open discussion of mental health issues.

To kick off the festivities, Queen Elizabeth II honored her red-headed, 33-year-old grandson with a new title: the Duke of Sussex, making the 36-year-old Markle the Duchess of Sussex.

The American actress drew raves for her sleek white silk boat-necked dress by U.K. designer Clare Waight Keller of the French fashion house Givenchy. Her sheer veil — down to her waist in front and billowing for what seemed like miles behind her — carried floral references to all 53 countries in the Commonwealth, countries drawn mostly from the former British Empire, headed by Markle’s new grandmother-in-law, the queen.

“The dress is simply beautiful in its classic simplicity,” said Caroline Burstein, owner of Browns Bride, a top London bridal boutique. She called it “a nod to Grace Kelly, Audrey Hepburn and every iconic wedding we have witnessed throughout the 20th and 21st century. It’s perfect for her and for the occasion they are celebrating.”

The palace said Markle also selected two other plant designs to be on the veil: Wintersweet, which grows at Kensington Palace. where the royal couple will live, and the California poppy, in a nod to the bride’s birthplace.

Harry and best man Prince William wore white gloves and the frock coat uniforms of the Blues and Royals army regiment, in which Harry was once an officer. Harry also kept his full red beard — a style decision that had sparked British betting earlier.

Markle at first walked down the aisle with 10 young page boys and bridesmaids, then was accompanied by Prince Charles to the altar. As his father and bride drew close, Harry said: “Thank you, Pa.”

Markle seemed poised and confident as she delivered her vows without so much as a quiver in her voice. She smiled broadly as archbishop of Canterbury Justin Welby declared the couple husband and wife.

As they emerged from the chapel, the couple kissed — and the crowd roared. It just kept on cheering as Harry helped his wife fold her over 16 foot train into the Ascot Landau carriage as they began their procession through the streets of Windsor.

Police said more than 100,000 people lined the route. The royal couple’s open-topped carriage was pulled by four Windsor Grey horses and passed crowds waving flags and holding cellphones aloft. The newlyweds smiled and waved, smiled at each other, waved and repeated the process for the 25-minute tour.

Other relatives in the ceremony included 4-year-old Prince George and 3-year-old Princess Charlotte, the oldest children of William and the Duchess of Cambridge.

The 92-year-old queen and her 96-year-old husband, Prince Philip, Harry’s grandparents, looked on with pride, as did Markle’s mother, Doria Ragland, who has spent the last few days getting to know her daughter’s new family. 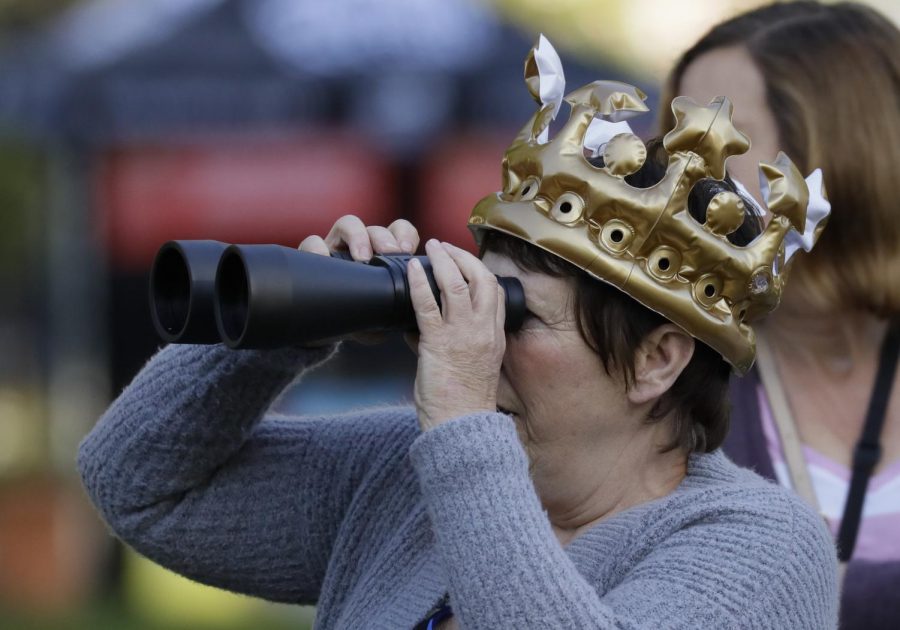 Gallery|11 Photos
(AP Photo/Kirsty Wigglesworth)
A woman with an inflatable crown looks through binoculars prior to the wedding ceremony of Prince Harry and Meghan Markle at St. George's Chapel in Windsor Castle in Windsor, near London, England, Saturday, May 19, 2018.

The queen hosted the first of two royal wedding receptions after the service Saturday, one in the afternoon for 600 people with finger foods, wine and champagne. On Saturday night, a second, more lively reception for 200 people was being thrown by Charles.

Yet it was the crowds in Windsor that seemed to best capture the joy of the moment. Many had camped or arrived at dawn on packed trains, vying for a good spot along the procession route. They cheered and screamed and sighed as the newlyweds passed by.

“I went to William and Kate’s wedding, but this is a completely different vibe,” said Arlene Prinsloo, who had flown from South Africa. “It’s much more relaxed, and I think that reflects who Harry is.”

Ana Karukin, a Brazilian nurse living in Florida, said she came to witness a moment of history.

“We’ve got to be here for him and for her, my Meghan, my special girl, to support them, because it’s a beautiful time,” she said. “I wish that Diana was here, but she’s in heaven watching over them.”