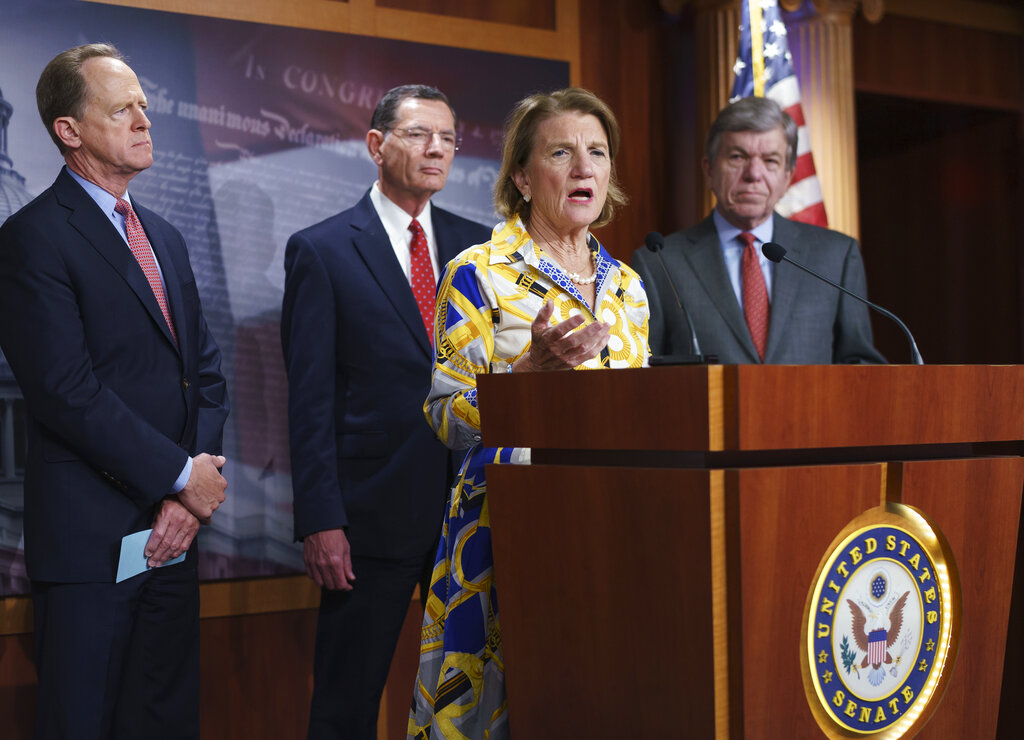 Sen. Shelley Moore Capito speaks at a May 27 news conference. She is the GOP’s lead negotiator on a counteroffer to President Joe Biden’s infrastructure plan. (J. SCOTT APPLEWHITE / Associated Press)

Sen. Shelley Moore Capito speaks at a May 27 news conference. She is the GOP’s lead negotiator on a counteroffer to President Joe Biden’s infrastructure plan.

The president proposed a 15% minimum corporate tax as part of bipartisan negotiations.

President Joe Biden is trying to break a logjam with Republicans on how to pay for infrastructure improvements, proposing a 15% minimum tax on corporations and the possibility of revenues from increased IRS enforcement as a possible compromise.
The offer was made Wednesday to Republican Sen. Shelley Moore Capito of West Virginia as part of the bipartisan negotiations and did not reflect a change in Biden’s vision for funding infrastructure.
White House press secretary Jen Psaki said Biden examined all the tax overhauls from his campaign and administration to look for potential common ground with Republicans and found that imposing a minimum corporate tax seemed like an option.
“He looked to see what could be a path forward with his Republican colleagues on this specific negotiation,” Psaki told reporters Thursday.

Biden has proposed increasing the corporate tax rate to 28% from 21% to help fund his plans for roads, bridges, electric vehicles and broadband internet, which remains one of his preferred approaches. But the rate hike is a nonstarter with Republicans because it would undo the 2017 tax cuts signed into law by former President Donald Trump.
By floating an alternative, Biden was trying to give Republicans a way to back infrastructure without violating their own red line of keeping corporate tax rates at their current level. The Washington Post first reported the offer.
On Thursday, Senate Republican leader Mitch McConnell said he spoke with Capito after the session and is “still hoping” to reach a deal with the administration. McConnell prefers the GOP approach of a scaled-down package, paid for by tapping unspent COVID-19 relief funds, rather than taxes.
“Let’s reach an agreement on infrastructure that’s smaller but still significant, and fully paid for,” he said in Paducah, Kentucky.
The president is essentially staking out the principle that profitable corporations should pay income taxes. Many companies can avoid taxes or minimize their bills through a series of credits, deductions and other ways of structuring their income and expenses.

Let’s reach an agreement on infrastructure that’s smaller but still significant, and fully paid for.”

The president has insisted that the middle class should not bear the cost of greater infrastructure spending. Yet a chasm exists in negotiations because Republicans say corporate tax increases will hinder economic growth.
The idea of imposing a minimum corporate tax is not new for Biden, who proposed the policy during the presidential campaign last year, and that could turn off some Republicans. The center-right Tax Foundation estimated that a minimum tax would subtract 0.21% from long-run U.S. gross domestic product.
“He’s been pushing it since the primaries over a year ago,” said George Callas, managing director of government affairs for the law firm Steptoe and a former tax counsel to House Republicans. Callas said the minimum tax would mostly hit firms such as electric utilities and telecoms that make substantial capital investments as well as companies that rely on paying their employees with stock.
At the same time, both Democrats and Republicans have eyed revenues that could come from stepped-up IRS enforcement of unpaid taxes. House Speaker Nancy Pelosi, D-Calif., has suggested it could amount to some $1 trillion, but others say the estimate is far lower.
Biden is seeking roughly $1 trillion in infrastructure spending, down from an initial pitch of $2.3 trillion. Republicans, so far, have countered with only $257 billion in additional spending on infrastructure as part of a $928 billion package. The GOP’s new spending on infrastructure would be a fraction of what the president says is necessary to compete globally and boost economic growth.
Talks over Biden’s top legislative priority have been moving slowly, a daunting undertaking given the massive infrastructure investment, and time for a deal is running out. The administration has set a Monday deadline to see clear direction and signs of progress.
Biden and Capito are set to meet again today.