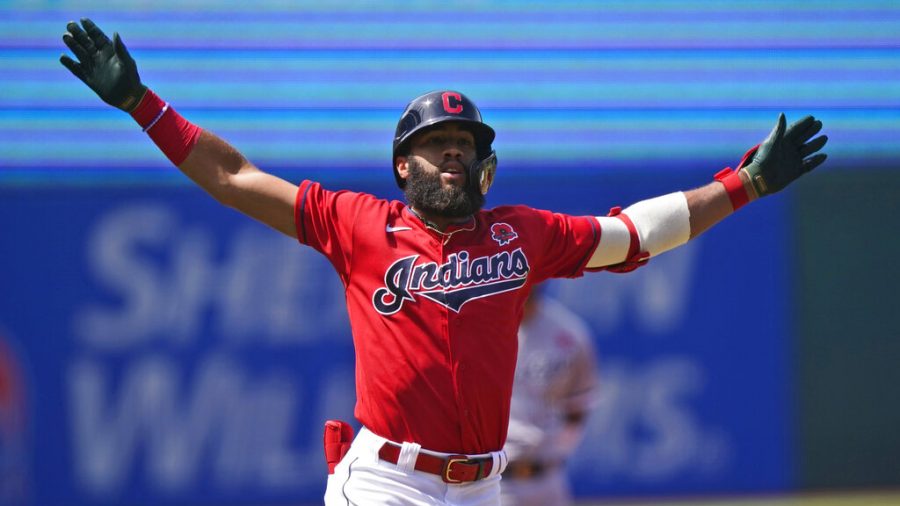 Cleveland Indians’ Amed Rosario celebrates after hitting a solo home run in the first inning of the first baseball game of a doubleheader against the Chicago White Sox on May 31.

New name will not have any connections to Native American themes.

CLEVELAND — Like expecting parents, the Cleveland Indians are trying to settle on a name.

The team said Thursday it has a final list from an initial pool of nearly 1,200 entries. It is vetting the possible team names for legal purposes after months of research and discussions with fans.

In December, the Indians said they were changing their name for the first time since 1915. The decision came during a national movement, including strong push from Native Americans, to replace prejudicial and racist names and symbols.

The team began meeting with groups of fans in February. Based on those discussions and feedback from community leaders, local influencers and staff members, the team concluded the new name needed to connect with the city, preserve the team’s history and unite the community.

The initial list consisted of 1,198 names. It’s unknown how many are under final consideration for the club’s new identity.

Owner Paul Dolan said months ago the new name will not have any Native American themes or connotations.

“We’ve engaged our fans and community on many aspects of our team name process,” said Curtis Danburg, the team’s vice president of communications and community impact. “We felt it was important to share our research journey and what we’ve learned so far.”

Do you think the #ClevelandIndians are doing the right thing by changing their name? @Indians

The forthcoming name change has sparked lively debate among Cleveland fans, some wanting the club to remain the Indians. Among the most popular names pushed by fans on social media are the Spiders, Guardians and Avengers.

Dating to 1865, Cleveland’s baseball team has previously been called the Spiders, Blues and Forest Citys.

Once the Indians have selected their final name choices, they will draft options for logos, word marks and other brand elements. The club will also work with Major League Baseball to ensure legal viabilities.

The name change will complete a rebranding by the Indians, who removed their contentious Chief Wahoo logo from their game jerseys and caps several years ago. The team, however, continues to sell merchandise featuring the grinning, cartoonish mascot.

Read the comments on a Facebook post by the Cleveland Indians updating people on the name change process and boy that was a mistake.

There are just so many better names/logos than Spiders.

I can’t wait to be outraged at the Cleveland Indians new name. #OurCle

I think the new team name should be the Cleveland Indians! https://t.co/MDn9KVAFe3

You’re out of your damn mind if you think I’ll be supporting this team after the name change. No way am I spending money on new merchandise. I’ll FOREVER wear my cleveland INDIANS CHIEF WAHOO apparel. It’s sad after this season I won’t be able to say I’m a lifelong @Indians fan pic.twitter.com/EvUx2mlw7L

I don’t live in Ohio, so I doubt my voice carries very far with this, but I know my least favorite Cleveland Indians rebranding options are no name at all, Guardians, and Spiders. I would rubber stamp most alternatives, but probably not all 1,195 of them.