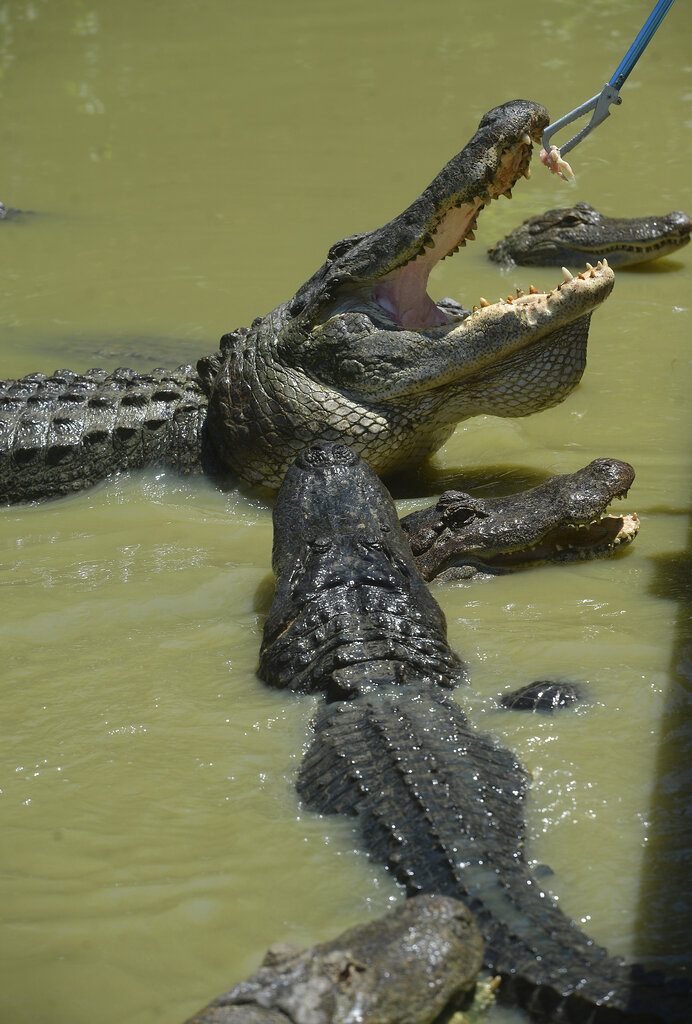 A pondful of hungry adult alligators get a chicken lunch at Gator Country in Fannett, Texas, on May 11. Gator Country reopened the first weekend in May after being closed for weeks amid COVID-19 restrictions. (KIM BRENT/The Beaumont Enterprise via AP)

A pondful of hungry adult alligators get a chicken lunch at Gator Country in Fannett, Texas, on May 11. Gator Country reopened the first weekend in May after being closed for weeks amid COVID-19 restrictions.

BEAUMONT — When Gary Saurage closed the doors to Gator Country March 11 amid coronavirus restrictions, a Big Al-sized bite was taken out of his income.

March is the second-largest earnings month for Gator Country, a 15-acre preserve home to rescued alligators and other reptiles. In April, the preserve had to cancel school field trips scheduled Monday through Friday and planned road shows.

Gator Country reopened on May 2.

We were so glad to get back open. When you got 500 alligators to feed, trust me, you need customers.”

On May 25, a slow trickle of guests made their way through the grounds, including Kayla Costanzo of Bridge City, who was visiting Gator Country for the first time with daughters Kenny and Braelynn. The family was glad for the opportunity to get out of the house, and she surprised her children with a long-anticipated first visit to the park.

Interns Jesus Reyes and Blake Mitchell gave the guests a guided tour of Gator Country’s alligator ponds, telling them about each of the gators as they fed raw chicken chunks to the dozens that surrounded the deck at the sounding of a lunch bell.

Next, Mitchell took them to the home of Gator Country legend Big Al, stepping inside the enclosure to call the 88-year-old 13-foot-plus gator to the pond’s edge using hand and voice signals. Standing just feet away, Mitchell used other hand signals to entice Big Al to open his large mouth. The showing by the behemoth is among the most popular events at the park.

Mitchell then took the Costanzo family to the reptile house, where the girls got to meet Josie, a Colombian red-tailed boa. Kayla took photos as each girl wore Josie like a boa draped round her shoulders.

Mitchell arrived for his internship just as the coronavirus quarantine went into effect and decided to stay through it. Since the restrictions were lifted, he has been able to put the knowledge he’s gained working with the gators to use with a public audience.

Mitchell was joined by Rick Stalker, who also started working at Gator Country as the pandemic took hold in Southeast Texas. The park has been a refuge of sorts for Stalker, as his lifelong job as a woodworker came to a sudden halt when he was laid off from Fine Touch Refinishing. Initially, the furlough was temporary, but it soon became permanent, Stalker said.

Gallery|9 Photos
KIM BRENT/The Beaumont Enterprise via AP
Intern Blake Mitchell coaxes legend Big Al out from his pond, using only voice and motion commands, as he is not authorized to touch the alligators, at Gator Country in Fannett, Texas, May 11. Gator Country reopened the first weekend in May after being closed for weeks amid COVID-19 restrictions.

Needing to get out of the house one day, Stalker took his drone out to try and capture on video a large alligator spotted near Smith Road in Beaumont. The gator search proved unsuccessful, but Stalker recalls thinking, “I can turn right and go home, or I can turn left.” He turned left and soon found himself near Gator Country.

The chance decision led to a video partnership between Saurage and Stalker, with Stalker shooting and editing footage of gator rescues and interviews with the park’s staff that air on YouTube.

His footage is looped on the screens outside the reptile house and YouTube posts have gotten high view volume.

Stalker is working toward reaching the 1,000-subscriber benchmark to begin monetizing his YouTube channel, turning his video skills into a new career path. The segments have caught the attention of a national media outlet, with whom they have been discussing a possible weekly spot.

His staff interview segments focus on why Gator Country staff and interns do what they do.