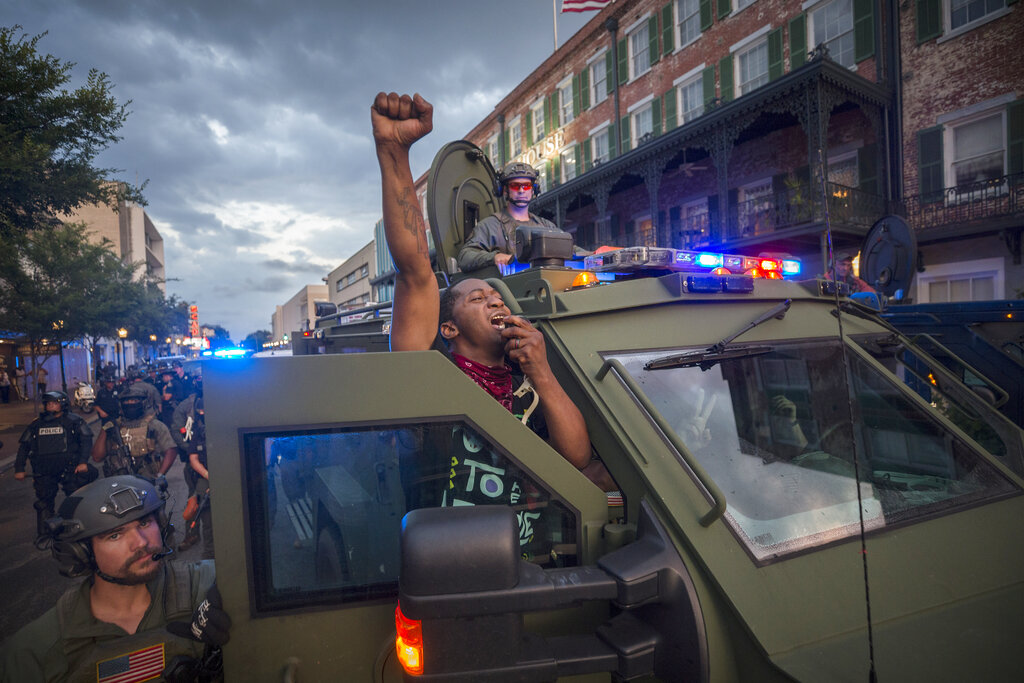 Protester Kendrick Cutkelvin of Savannah uses a Savannah SWAT vehicle loudspeaker to disperse a small crowd of protesters after a peaceful rally and march in honor of George Floyd on May 31 in Savannah, Georgia. (STEPHEN B. MORTON/Atlanta Journal-Constitution for AP)

Protester Kendrick Cutkelvin of Savannah uses a Savannah SWAT vehicle loudspeaker to disperse a small crowd of protesters after a peaceful rally and march in honor of George Floyd on May 31 in Savannah, Georgia.

STEPHEN B. MORTON/Atlanta Journal-Constitution for AP

Roundup: The stories of protesters as told by tweets

MINNEAPOLIS — Over the past week, protests sparked by the death of George Floyd, a black man who died after a white Minneapolis police officer pinned a knee to his neck, have involved thousands of people gathered tightly together in large crowds in more than 20 cities nationwide.

The turbulence sparked by Floyd’s death shook not only the streets of Washington, D.C., New York and Los Angeles but also dozens of smaller communities such as Fargo, North Dakota, and Lincoln, Nebraska.

Peaceful protests involving tens of thousands of people have given way, in some places, to rioting, looting and violence, with police vehicles torched, stores emptied and objects hurled at officers. The police response has varied from restrained to aggressive, with officers at times firing tear gas and rubber bullets.

In many cities, protests turned violent.

We have gas in Atlanta. Most of it is blowing back onto police.#BlackLivesMatter
pic.twitter.com/yGniXqMnwz

not a single weapon. no aggression. no resistance of force. just people sat in the street. YET LOOK AT WHAT THEYRE DOING TO THEM. TEAR GAS. PHYSICAL FORCE. #BLACK_LIVES_MATTER pic.twitter.com/pFELgcnbzL

Not one rubber bullet or tear gas canister deployed.

White police officer throws a girl who is already on her hands and knees BUT a BLACK QUEEN officer steps in to check him ✊🏾#share #protests2020 pic.twitter.com/nKmvF6Oiqu

What a powerful picture #protests2020 pic.twitter.com/NEiaWIyXiD

Salt Lake City cops shove down an elderly man with a cane for the crime of standing along the street: pic.twitter.com/PCLkHqQtJg

I am heartbroken and disgusted to see one of my family members a young black man w/his hands up peacefully protesting and an NYPD officer pulls down his mask and pepper sprays him. @NYCSpeakerCoJo @BPEricAdams @FarahNLouis @JumaaneWilliams @NewYorkStateAG @NYPDShea cc: @EOsyd pic.twitter.com/tGK5XWS0bt

Still, many protests have been peaceful or started peacefully.

“If I’m not over here messing up my community, then what are you all doing? … You all are doing nothing, because that’s not going to bring my brother back.”

George Floyd’s brother arrived at the Minneapolis memorial site and was surrounded by a large crowd that was “peaceful and respectful,” @sarasidnerCNN reports. https://t.co/XjjgPYZfK9 pic.twitter.com/uMxv8MmK3e

Protest in Memphis TN rn, where I am. the police aren’t in swat or using tear gas. they are just letting the people of the city protest, as they should. pic.twitter.com/ItjnoxqRM7

this is all we want, a voice, and police to listen… not to confronted with rubber bullets or tear gas. pic.twitter.com/3QZujakR1G

many of you aren’t seeing this side of the Minneapolis protests and it shows!! #blacklivesmatter pic.twitter.com/40BklrrO02

Incredible scene at Colorado’s Capitol right now. Thousands of protesters are lying face down with their hands behind their backs chanting “I can’t breathe.” They’re doing this for 9 mins. #copolitics #denverprotest #GeorgeFloyd pic.twitter.com/PaABvp8ZoM

the media and the alt-right’s narrative that all protests are “thugs” is FALSE. this was today in West Palm Beach, Fl. protesters were calm and respectful. we shut down I-95 without fire or destruction of property. it was all peaceful until WHITE ANARCHISTS set fire to the outlet pic.twitter.com/m8GqCPfuip

Germantown Maryland had a peaceful protest today thank you to everyone that came out did that thang. 🙏🏾💚‼️ pic.twitter.com/J2jzAsw54v

Spokane held a #BlackLivesMatter peaceful protest, we marched to the courthouse and were met with the police. We took a knee and asked them to do so as well, they refused at first but herd our voices and our pleas and finally took a knee in respect. We can and will make a change. pic.twitter.com/30wtO778BO

Beautiful moment of respect in Boston for George Floyd’s life but bet you won’t see this and the peaceful protests we had for hours before all hell broke loose. #bostonprotests #Anonymuos pic.twitter.com/ZXMRMybGSm

The death of George Floyd has also sparked international protests.

Two #BlackLivesMatter solidarity marches are taking place in Dublin, Ireland right now. About 2,000 are on this one heading to the US embassy right now. This follows yesterdays Dublin demos, see thread /1
#GeorgeFloyd #JusticeForGeorge#EndDirectProvision pic.twitter.com/fpm773dsvm

They are actually protesting in BERLIN GERMANY… Our Police behavior has become a Global embarrassment.. wow. https://t.co/wYCmtnkJgF

The World is coming together to fight racism, be apart of the change.#BlackLivesMatter #AboriginalLivesMatter pic.twitter.com/N7W1hCAJla