A sign for a church in Clay County’s Henrietta, Texas proclaims no service on May 8. Clay County Judge Mike Campbell accepted a mobile testing site for COVID-19 when it was offered. Like many of North Texas’ rural counties, social distancing comes naturally to Clay County, where about 11,000 people are spread out across roughly 1,100 square miles. (AMANDA MCCOY /Fort Worth Star-Telegram via AP)

A sign for a church in Clay County’s Henrietta, Texas proclaims no service on May 8. Clay County Judge Mike Campbell accepted a mobile testing site for COVID-19 when it was offered. Like many of North Texas’ rural counties, social distancing comes naturally to Clay County, where about 11,000 people are spread out across roughly 1,100 square miles.

FORT WORTH— When Archer County Judge Randy Jackson got the call about two weeks ago from the state offering to set up a pop-up mobile testing site, he turned it down.

With a population of roughly 8,500 near the Texas-Oklahoma border, the county has developed its own system, screening residents for symptoms and sending them north to Wichita Falls or south to Olney to be tested, Jackson said.

“We’re spread out more, and we don’t have the industry like bigger urban areas do, so we kind of had to initiate our own protocol,” Jackson said. “We’re taking care of ourselves.”

Archer County is one of more than 100 Texas counties that have five or fewer active COVID-19 cases. They have been approved by the Texas Department of State Health Services to reopen their businesses at 50% capacity as a result — while the remaining counties are restricted to 25% capacity. 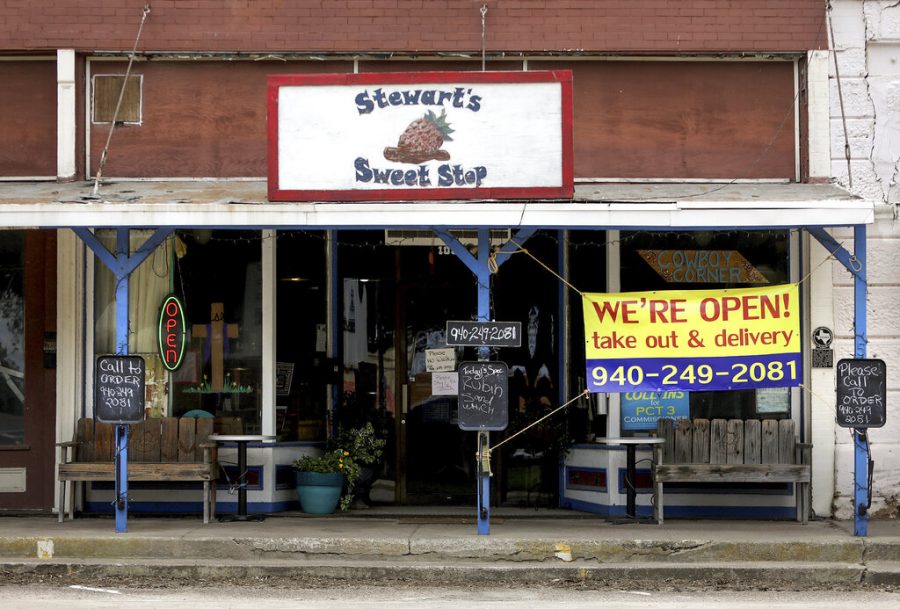 Gallery|4 Photos
AMANDA MCCOY /Fort Worth Star-Telegram via AP
Stewart's Sweet Shop in Henrietta advertises take out and delivery service on May 8. Despite Gov. Greg Abbott's decision to let rural counties with less than five confirmed coronavirus cases open restaurants at 50% capacity, many have chosen to remain with curbside service.

But in many North Texas counties like Archer permitted to reopen at double the capacity, fewer cases have been coupled with far less testing. Their populations have a small fraction of the over 2 million residents in Tarrant County; some surrounding counties have as few as 9,000 people. But state data shows many have conducted far fewer tests per capita than some of the region’s more populous counties.

And Archer County wasn’t the only one to decline the state’s offer of a mobile test site that could have boosted its testing capabilities — if only for a day. Seth Christensen, a spokesperson for the Texas Division of Emergency Management, confirmed in an email that the counties of Jack and Montague have also “chosen to use local assets and testing capabilities to complete testing in their county.” Jack and Montague’s county judges did not respond to requests for comment.

Public health experts have warned sufficient testing is a key component to understanding the level of spread in a community. Without it, the virus may be spreading undetected.

Chris Van Deusen, a spokesperson for the Department of State Health Services, wrote in an email that data on hospitalizations and deaths has shown otherwise.

There has generally been less COVID-19 in rural areas where people tend to have fewer interactions, and there hasn’t been evidence through hospitalizations and deaths of widespread, undetected disease. We encourage everyone who thinks they may have COVID-19 to be tested whether it’s through doctor’s offices, clinics, hospitals or public sites like the state mobile testing sites.”

Earlier this month, before the county had seen a confirmed case, Jackson was hopeful that the virus had skipped over his county. At the time, he knew it might be overly optimistic, but has seen residents practicing social distancing and churches and businesses abiding by reopening guidelines.

Despite Jackson’s hopes that Archer would remain virus-free, Catherine Troisi, an infectious disease epidemiologist at the University of Texas School of Public Health in Houston, said it would be surprising if a rural county escaped the virus’ spread.

“They’re just going to get it later than the big cities, the urban areas,” Troisi said. “And again, without testing, you don’t have a complete picture of what’s going on.”

In an effort to bolster testing across Texas, mobile test sites have been sent throughout the state in collaboration with the Department of State Health Services, the Division of Emergency Management and the Texas Military Department. Staffed with Texas National Guard members, the sites are available to any local official who requests one. So far, they had tested over 30,000 people in 210 counties, Christensen wrote.

If the site had been offered in the early days of the outbreak, Jackson said he might have considered it. But in his view, what Archer County has been doing is working.

“I did not want the National Guard to come in and 10 to 15 health care personnel, fully decked out in (personal protective equipment) to scare everyone and make them panic,” Jackson said. “And also, I didn’t want sick people from other counties coming in. So I respectfully declined that offer.”

Meanwhile, to the east, Clay County Judge Mike Campbell accepted a mobile testing site when it was offered. Like many of North Texas’ rural counties, social distancing comes naturally to Clay County, where about 11,000 people are spread out across roughly 1,100 square miles.

“We knew going into this that, while we’re not as vulnerable, we’re certainly not immune,” Campbell said. “For us, we felt like it’s better to know.”

Clay County has seen three confirmed cases, and all have recovered. According to DSHS data, 91 tests have been conducted, resulting in nearly 8.7 tests per 1,000 residents — although Campbell reported only 38 have been tested through Clay County’s hospital.

State data may differ from local figures, as the state includes all testing, regardless of where the test was done, Van Deusen wrote.

Public health experts and virologists have cautioned that easing restrictions and reopening businesses will likely contribute to an increase in the virus’ spread. And John Gibson, an assistant dean at the Texas College of Osteopathic Medicine at the University of North Texas’ Health Science Center, said even in rural counties testing needs to increase.

“We’ve got to be able to test several hundred people in a day and maybe have that going on several days a week,” said Gibson, who specializes in rural health care.

Rural counties often rely on each other for resources — especially for health care. If a Clay County resident’s condition was bad enough to need a ventilator, they would need to go one county over to Wichita County to be treated, Campbell said. And residents have often been tested in counties outside of where they reside, sometimes causing delays in results being reported back to local officials.

In those instances, patients awaiting results should continue to isolate themselves to ensure they don’t spread the virus if they’re infected, Van Deusen said.

“If anything good can come from this, maybe it’s a realization of how critical and how fragile rural hospitals are,” Campbell said.