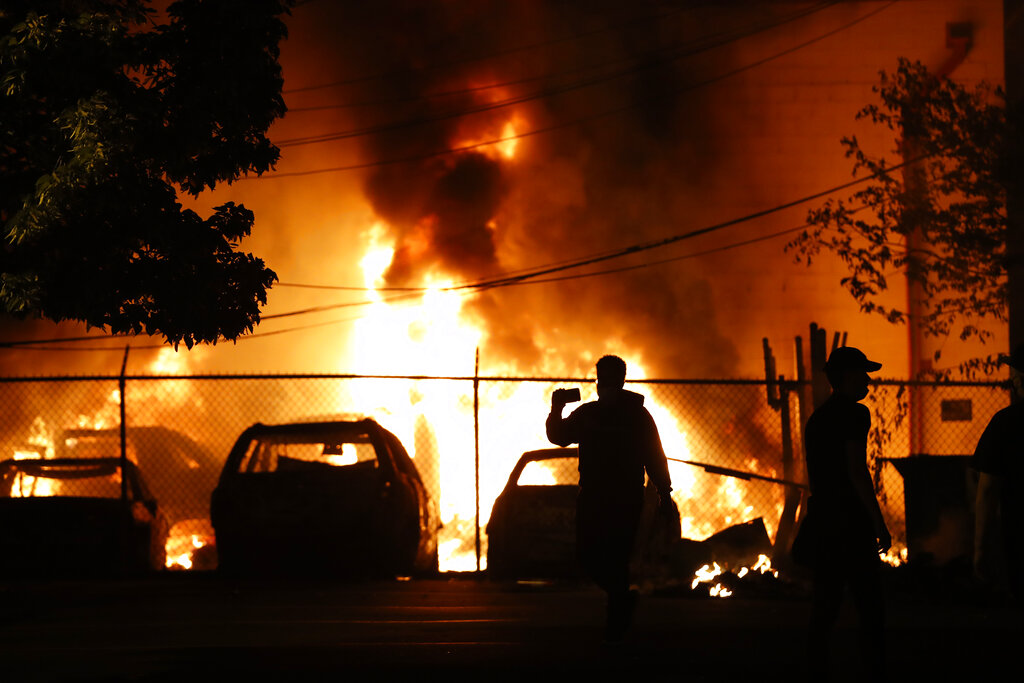 People watch a fire on May 29 in Minneapolis. Protests continued following the death of George Floyd who died after being restrained by Minneapolis police officers on Memorial Day. (JULIO CORTEZ/Associated Press)

People watch a fire on May 29 in Minneapolis. Protests continued following the death of George Floyd who died after being restrained by Minneapolis police officers on Memorial Day.

WASHINGTON — Although Gov. Tim Walz has not requested federal troops, the Pentagon said Saturday it was ready to provide military help to authorities scrambling to contain unrest in Minneapolis, where George Floyd’s death has sparked widespread protests.

Jonathan Rath Hoffman, the chief Pentagon spokesman, said several military units have been placed on higher alert “as a prudent planning measure” in case Walz asks for help. The Associated Press first reported on the potential deployments and, citing sources with direct knowledge of the orders, named four locations from which soldiers would be drawn. 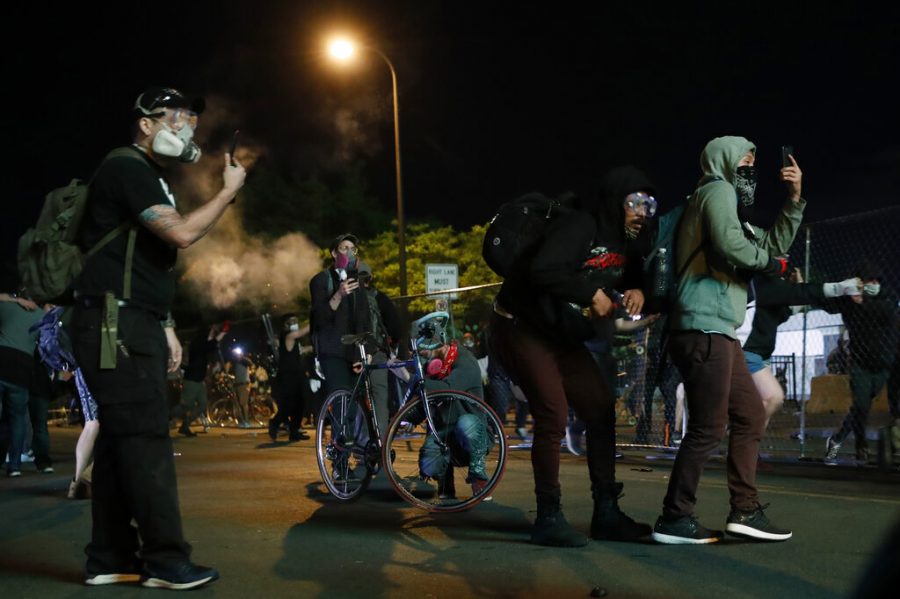 Gallery|2 Photos
AP
Protesters are seen May 29, 2020, in Minneapolis. Protests continued following the death of George Floyd, who died after being restrained by Minneapolis police officers on Memorial Day.

Hoffman did not identify the units, but other officials said they are mainly military police. Hoffman said these are units normally on 48-hour recall to support state authorities in the event of crises like natural disasters. They are now on four-hour alert, Hoffman said.

Defense officials said the Pentagon does not intend to deploy any federal forces to Minnesota unless Walz asked for help. If Walz did make such a request, federal units such as military police could provide logistical and other kinds of support to the Minnesota National Guard or state law enforcement, but would not get directly involved in law enforcement under current plans, the officials said. They were not authorized to discuss the planning publicly and spoke on condition of anonymity.

Hoffman said Defense Secretary Mark Esper and Gen. Mark Milley, chairman of the Joint Chiefs of Staff, had spoken to Walz twice in the past 24 hours and told him the Pentagon was prepared to help if needed.

Maj. Gen. Jon Jensen, the adjutant general of the Minnesota National Guard, said the Pentagon’s decision to place some military units on a higher state of alert for potential deployment was “a prudent move” that gave Walz more options.

Earlier, Alyssa Farah, the White House director of strategic communications, told the AP the rumor that active-duty military police would be deployed to Minnesota was untrue. In an email, she referred to Title 10, the U.S. law that governs the armed forces and would authorize active-duty military to operate within the country.

“False: off the record – title 10 not under discussion,” said Farah. No off-record agreement was negotiated with the AP.

President Donald Trump urged Walz and other authorities in Minnesota to “be tough” in Minneapolis.

“We have our military ready, willing and able if they ever want to call our military, and we can have troops on the ground every quickly,” Trump said.

Soldiers from Fort Bragg in North Carolina and Fort Drum in New York have been ordered to be ready to deploy within four hours if called, according to three people with direct knowledge of the orders. Soldiers in Fort Carson in Colorado and Fort Riley in Kansas have been told to be ready within 24 hours. The people were not were not authorized to discuss the preparations publicly and spoke on condition of anonymity.

The get-ready orders were sent verbally Friday, after Trump asked Esper for military options to help quell the unrest in Minneapolis after protests descended into looting and arson in some parts of the city.

Trump made the request on a phone call from the Oval Office on Thursday night that included Esper, national security advisor Robert O’Brien and several others. The president asked Esper for rapid deployment options if the Minneapolis protests continued to spiral out of control, according to a senior Pentagon official who was on the call.

The person said the military units would be deployed under the Insurrection Act of 1807, which was last used in 1992 during the riots in Los Angeles that followed the Rodney King trial.
Another official said Saturday, however, that federal troops could be deployed to Minnesota without invoking that act. In that situation, they would perform non-law enforcement duties such as providing logistics help.

“If this is where the president is headed response-wise, it would represent a significant escalation and a determination that the various state and local authorities are not up to the task of responding to the growing unrest,” said Brad Moss, a Washington D.C.-based attorney, who specializes in national security.

Active-duty forces are normally prohibited from acting as domestic law enforcement, but the Insurrection Act offers an exception. There was no indication Saturday that Trump intended to invoke that act.

It would allow the military to take up a policing authority it otherwise would not be allowed to do, enforcing state and federal laws, said Stephen Vladeck, a University of Texas School of Law professor who specializes in constitutional and national security law.

The statute “is deliberately vague” when it comes to the instances in which the Insurrection Act could be used, he said. The state’s governor could ask Trump to take action or Trump could act on his own authority if he’s determined that the local authorities are so overwhelmed that they can’t adequately enforce the law, Vladeck said.

“It is a very, very broad grant of authority for the president,” he added.