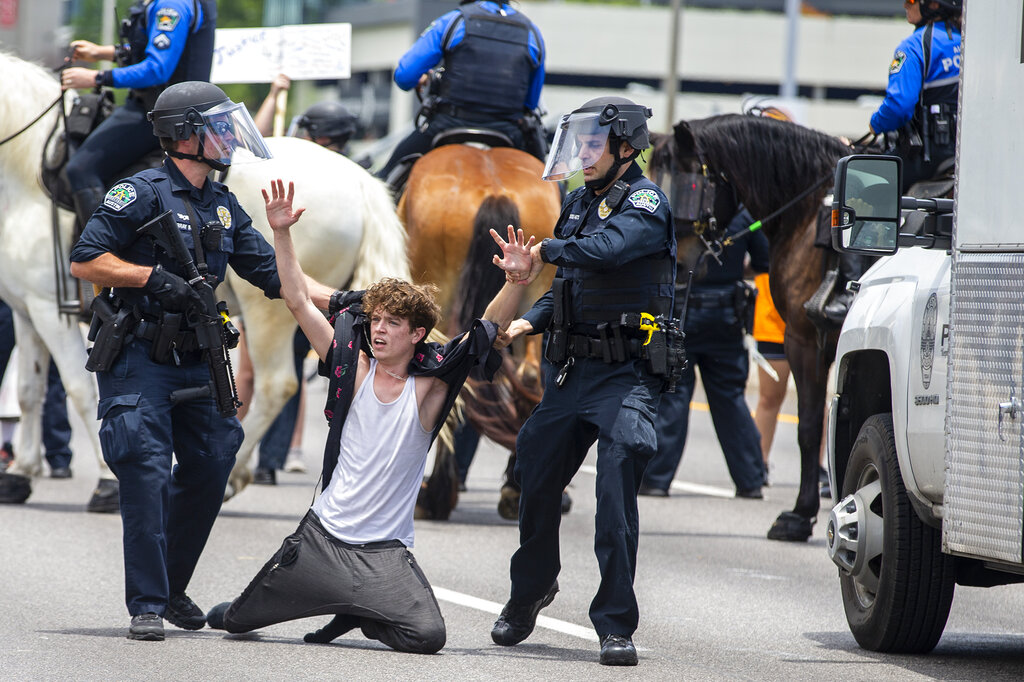 Two Austin Police officers arrest a protester as they shut down southbound I-35 freeway in Austin,Texas on May 30. Demonstrators were protesting the death of George Floyd, a black man who was killed in police custody in Minneapolis on May 25. (Ricardo B. Brazziell/Austin American-Statesman via AP)

Two Austin Police officers arrest a protester as they shut down southbound I-35 freeway in Austin,Texas on May 30. Demonstrators were protesting the death of George Floyd, a black man who was killed in police custody in Minneapolis on May 25.

Ricardo B. Brazziell/Austin American-Statesman via AP

Austin today became the latest scene of nationwide protests following the killing of a black man by Minneapolis police earlier this week. 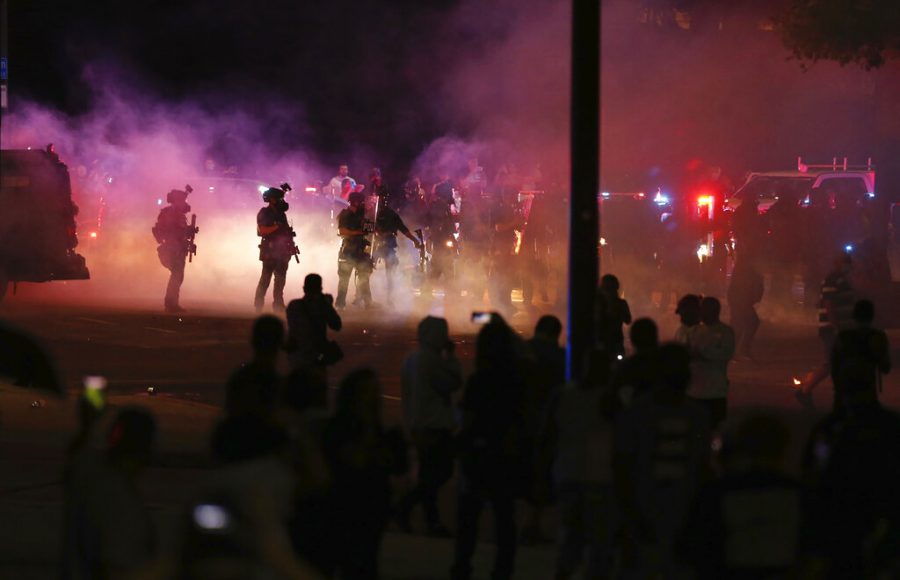 Gallery|5 Photos
AP
Protesters rally during a demonstration against police brutality in downtown Dallas, on May 29, 2020. George Floyd died in police custody in Minneapolis on May 25. (Vernon Bryant/The Dallas Morning News via AP)

“Texas and America mourn the senseless loss of George Floyd and the actions that led to his death are reprehensible and should be condemned in the strongest terms possible,” Abbott said in a news release. “As Texans exercise their First Amendment rights, it is imperative that order is maintained and private property is protected.”

The troopers were being sent to Houston, Dallas, Austin and San Antonio, the governor said.

In Austin, hundreds of people gathered outside police headquarters and many later marched peacefully along Interstate 35 as police shut down the interstate to traffic.

The rally was for both Floyd and Michael Ramos, a 42-year-old man who was fatally shot last month by Austin police.

In a statement to Austin media Ramos’ mother, Brenda Ramos, issued a plea for calm.

“I am heartbroken over the terrible murder of George Floyd. I understand the anger. But I am pleading with the community, please do not commit violence in my son Mike’s name,” the statement said.

LIVE: Protestors gather outside @Austin_Police headquarters calling for justice in the deaths of #GeorgeFloyd in #Minneapolis and #MichaelRamos in #Austin. STORY: https://t.co/C3TXsX60rp https://t.co/p5Xl5XtRST

Houston Police Chief Art Acevedo said nearly 200 people were arrested Friday during a protest in which many blocked an Interstate 45 ramp and a highway.

Those arrested “participated in unlawful assemblies,” Acevedo said Saturday on Twitter. “Most will be charged with obstructing a roadway,”

Authorities in Dallas used tear gas and those in Houston used pepper spray to disperse crowds that numbered in the hundreds. Dallas Police Chief Renee Hall said officers were making sure the protest was peaceful when violence began.

“Then all of a sudden bricks start hailing, hitting our squad cars, hitting the officers … I almost got hit with a brick,” Hall said.

It was not clear how many were arrested in Dallas and police did not immediately return a phone call seeking comment Saturday.

Protests have spread across the U.S., fueled by outrage over Floyd’s death. On Friday, the white Minneapolis police officer who knelt on Floyd’s neck was arrested and charged with murder.

Utah Gov. Gary Herbert has activated the Utah National Guard after protesters angry over Floyd’s death turned violent during a demonstration in Salt Lake City at which some participants carried rifles.

Herbert says in a tweet that the Guard will help control “the escalating situation” in the downtown area following the unrest Saturday afternoon.

The protest started peacefully but degenerated into violence. A group of people flipped over a police car and lit it on fire. Some demonstrators smashed eggs and wrote graffiti on the walls of the Salt Lake City police station. Others marched through downtown to the state Capitol.

With protesters back out Saturday, Garcetti said everyone must be off downtown streets by 8 p.m. and stay away until 5:30 a.m.

That followed a night of violence during which people smashed windows, robbed stores and set fires. Los Angeles police reported arresting 533 people during the night.

The Washington State Patrol has closed Interstate 5 in both directions through downtown Seattle after the protest there spilled onto the freeway.

Thousands of people gathered in the downtown area Saturday for a largely peaceful demonstration, but some protesters turned rowdier as the afternoon wore on. Police used pepper spray on the demonstrators and deployed flash bang devices.

Police said arrests were made, but an exact figure wasn’t available.

State patrol Chief John Batiste said in a statement that “the freeway is not a safe or appropriate place for demonstration.”

Six of the council’s 13 members say they support a call from Floyd’s family for Attorney General Keith Ellison to handle the prosecution of the police officer who held his knee on Floyd’s neck Monday. The council members say they don’t think Hennepin County Attorney Mike Freeman has the public trust necessary for the job.

The council members say Freeman waited too long in bringing charges. They say Ellison, who is black, is best qualified to handle the case. They also cite a working group he helped lead on deaths involving police.