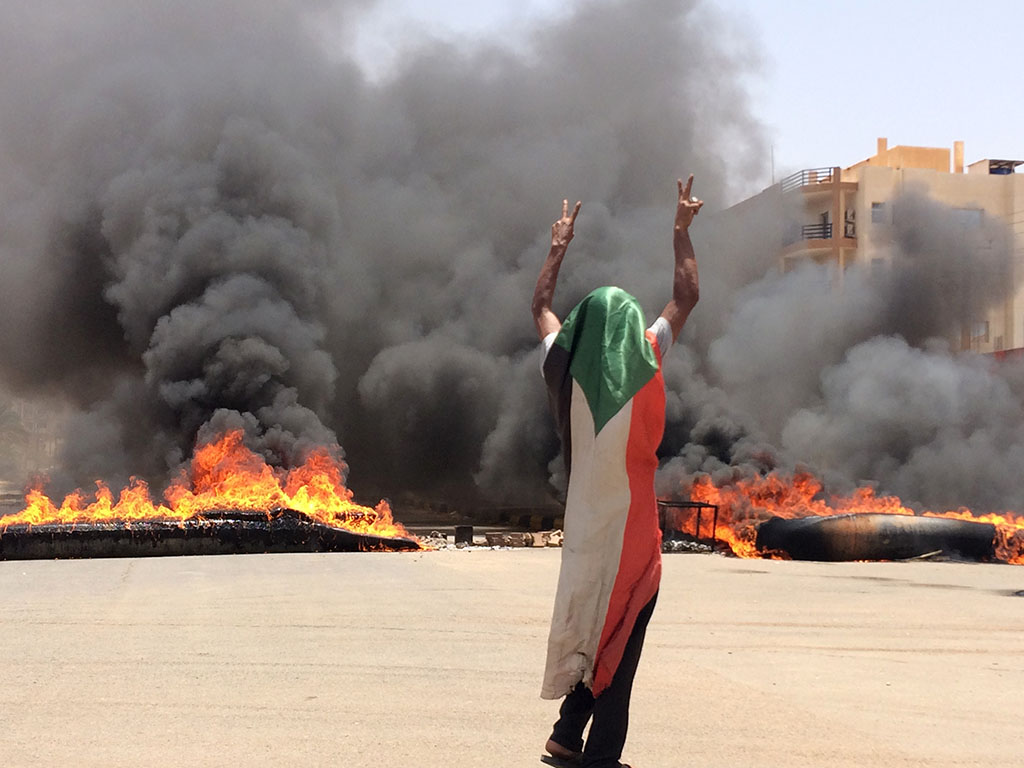 A protester wearing a Sudanese flag flashes the victory sign in front of burning tires and debris on road 60, near Khartoum’s army headquarters, in Khartoum, Sudan, Monday. Sudanese protest leaders say at least 13 people have been killed Monday in the military’s assault on the sit-in outside the military headquarters in the capital, Khartoum. The protesters have announced they are suspending talks with the military regarding the creation of a transitional government. (Associated Press)

A protester wearing a Sudanese flag flashes the victory sign in front of burning tires and debris on road 60, near Khartoum’s army headquarters, in Khartoum, Sudan, Monday. Sudanese protest leaders say at least 13 people have been killed Monday in the military’s assault on the sit-in outside the military headquarters in the capital, Khartoum. The protesters have announced they are suspending talks with the military regarding the creation of a transitional government.

With the assault, the generals signaled an end of their tolerance of the pro-democracy demonstrators, who for months have camped outside the military’s headquarters as the two sides negotiated over who would run the country after the April ouster of longtime strongman Omar al-Bashir.

After they succeeded in forcing the military to remove al-Bashir, the protesters had stayed in the streets, demanding the generals move to the background and allow civilians to lead the transition.

The dispersal of the sit-in now risks escalating violence even further. Scattered by the bloody assault, protesters vowed to keep up their campaign, suspending talks and calling for a general strike and civil disobedience. They urged nighttime marches across the country.

“This is a critical point in our revolution. The military council has chosen escalation and confrontation,” said Mohammed Yousef al-Mustafa, a spokesman for the Sudanese Professionals’ Association, which has spearheaded the protests.

The military “has completely destroyed the trust of the Sudanese people and crushed the people’s hope for a new era of respect for human rights and respect for the right to protest without fear.”

“Those are criminals who should have been treated like al-Bashir,” he said. “Now the situation is either them or us, there is no other way.”

The ruling military council said in a statement that security forces had been trying to clear an area adjacent to the protest camp when those it was chasing fled into the sit-in site, leading to the shooting deaths and injuries.

But activists said the assault appeared to be a coordinated move, with other forces attacking similar sit-ins in Khartoum’s sister city of Omdurman and the eastern city of al-Qadarif.

The attack came on the day before the Eid holiday that ends Ramadan, the holy month when Muslims fast during daylight hours. Large numbers of troops from the military, police and Rapid Support Forces — an elite unit that during the anti-al-Bashir protests vowed to protect the sit-in — moved in on the gathering after overnight rains, activists said.

“They are surrounding the sit-in from all directions,” one activist, Amal al-Zein, said early in the assault, in which the forces burned tents and arrested those trying to flee.

An Associated Press journalist heard gunshots and explosions, and saw buses and soldiers on foot blocking roads leading to the protest site. In online videos, protesters were seen running and ducking as barrages of gunfire echoed. Smoke rose from tires set ablaze by the protesters.

Demonstrators stood behind low barricades of bricks and dug-up pavement, and some threw stones before being driven back by walls of blue-clad security forces carrying sticks. One video showed police swarming around a protester sprawled on the ground, beating him with sticks. In another video, residents opened their doors to shelter those who ran.

The Sudan Doctors’ Committee put the death toll at 30 and said it was rising, although it was difficult to count in the area outside the military complex in Khartoum. Hundreds were wounded, many by gunfire, the group said.
Medical personnel and wounded were trapped in clinics as troops overran the area.

“Wounded people are lying on the ground in the reception area as there are not enough beds,” said Dr. Azza al-Kamel of the Royal Care hospital.

Hundreds were arrested, according to al-Zein and another activist, Hisham Shalabi. Photos posted online showed dozens of men and women lined up on the pavement, sitting or lying face down, under guard by troops.

The assault ended the sit-in at the heart of the movement that echoed the 2011 Arab Spring uprisings — although Sudan’s sought to learn from the mistakes of other protesters. Its leaders insisted that the removal of al-Bashir after 30 years in power was not enough. Tens of thousands remained in place in Khartoum and other camps around the country, demanding a fast transition to civilian rule.

The negotiations had imposed a degree of peace, but tensions mounted in recent weeks as the talks yielded little progress. The talks focus on the makeup of a transitional “sovereignty council” that would run the country for the next three years. Protesters demand the military have only limited involvement in the council, but the ruling generals have resisted relinquishing power.

Just over a week ago, Gen. Abdel-Fattah Burhan, head of the military council that is ruling Sudan, met with his two top allies, the president of Egypt and the crown prince of the United Arab Emirates. Those leaders backed al-Bashir’s removal and have given strong support to the military council. They also deeply oppose movements such as those that swept the region in 2011.

The military council urged protest leaders to resume talks as soon as possible to “achieve the desired transformation.”

Until now, negotiations over the transition had kept a tenuous level of peace. But after Monday’s attack, protest leaders suspended the talks with the military council and called for a general strike and “total civil disobedience.”

In addition to calling for the nighttime marches, the Sudanese Professionals’ Association also called for closing off main roads to “paralyze public life” across the country.

The Forces for Declaration of Freedom and Change, which represents the protesters in the negotiations, called for toppling the military council and more street protests.

U.N. Secretary-General Antonio Guterres condemned the crackdown and called for authorities to allow an independent investigation, said his spokesman Stephane Dujarric. “There was use of excessive force by the security force on civilians,” Dujarric said.

The U.N. human rights chief, Michelle Bachelet, expressed alarm at reports that live ammunition was used in the attack, including “next to, and even inside, medical facilities.”

The embassies of the U.S. and Britain also expressed concern.

The military “has completely destroyed the trust of the Sudanese people and crushed the people’s hope for a new era of respect for human rights and respect for the right to protest without fear,” said Sarah Jackson, Amnesty International’s deputy regional director for East Africa.