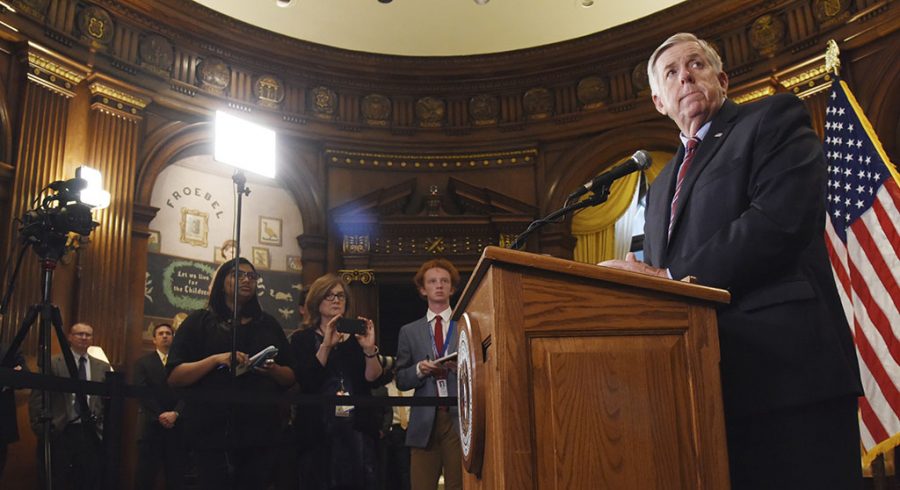 Missouri Gov. Mike Parson listens as a member of the media asks a question during a press conference in his Jefferson City, Mo., Capitol office Wednesday regarding the state of operations of a Planned Parenthood facility in St. Louis. The clinic has two days to remedy the issues found or face non-renewal of their operating license. Julie Smith/The Jefferson City News-Tribune

ST. LOUIS — Missouri has at least temporarily avoided becoming the first state without a functioning abortion clinic since 1974, the year after the Roe v. Wade Supreme Court decision.

A St. Louis judge Friday intervened on behalf of a Planned Parenthood clinic there that is at odds with state regulators who refuse to renew the facility’s license to perform abortions. The license was set to expire Saturday.

The Missouri Department of Health and Senior Service cited patient safety concerns and said it wanted to talk to several clinic doctors. Planned Parenthood said two staff doctors agreed to interviews, but others who are contractors or no longer work at the clinic would not talk.

Here are answers to key questions surrounding the potential closure of Missouri’s only abortion clinic:

How did it get to this point?

Missouri law requires an annual inspection of abortion clinics. The St. Louis inspection  was in March.

The health department cited several deficiencies, including “at least one incident in which patient safety was gravely compromised.” It also cited what it called “failed surgical abortions in which women remained pregnant” and an alleged failure to obtain “informed consent.”

At a hearing before Judge Michael Stelzer on Thursday, Planned Parenthood attorney Jamie Boyer said the seven deficiencies have been “remedied,” but the license is threatened unless the non-staff physicians agree to be interviewed. Boyer said Planned Parenthood can’t force people who aren’t on staff to cooperate.

Assistant Attorney General John Sauer told the judge any doctor who has performed an abortion should be made available for the investigation.

What does the judge’s Friday ruling mean?

Where else do Missouri women get abortions?

Some Missouri residents must already travel hundreds of miles to get an abortion. Closure of the St. Louis clinic would mean they might have to go farther, but not much: The Hope Clinic for Women performs abortions in Granite City, Illinois, 10 miles from St. Louis.

For people in the western half of the state, the closest option is Planned Parenthood’s abortion services clinic in Overland Park, Kansas, a suburb of Kansas City, Missouri, just 2 miles from the state line.

About 3,300 of the 7,000 abortions performed in Kansas last year were for Missouri residents, according to Kansas’ health department. Information provided by the state of Missouri shows that at least 48 percent of Missourians who received abortions in 2017 – the most recent data available — did so in another state. But the percentage is almost certainly higher because some states, including Illinois, don’t provide the data.

Yes, and they recently became more so.

Parson signed a bill May 24 that bans abortions on or beyond the eighth week of pregnancy, with exceptions for medical emergencies, but not for rape or incest.

Even before that law takes effect Aug. 28, strict regulations in Missouri over the past several years have limited access to the procedure, according to abortion-rights supporters.

They cite regulations ranging from waiting periods before the procedure can occur to rules on the width of clinic doors. Abortion-rights supporters say the rules are arbitrary, with the goal of forcing clinics to close.

Planned Parenthood said a state law requiring physicians who provide abortions to partner with a nearby hospital, which many hospitals have been unwilling to do, resulted in a Columbia clinic losing its license to perform abortions in 2018.