Border leaders: Trump’s tariffs could hurt border state, US economies as much as Mexico’s 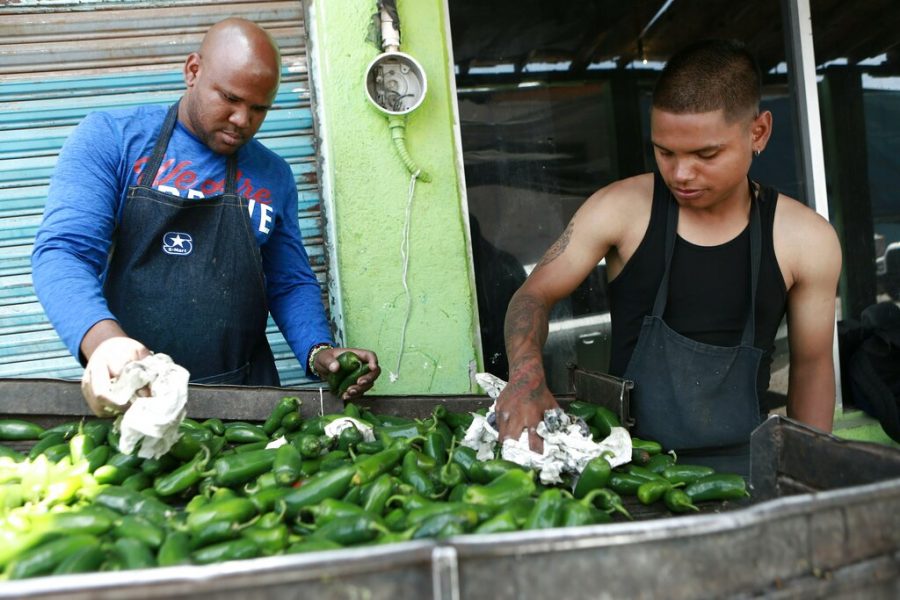 Workers prepare peppers for export from Mexico to the United States in Ciudad Juarez, Mexico, on Friday. If the tariffs threatened by President Donald Trump on Thursday took effect, Americans could see higher prices in grocery stores. The U.S. imports $12 billion of fresh fruits and vegetables from Mexico. Christian Torrez/Associated Press

With a looming trade war with Mexico on the horizon, Texas’ proximity to its southern neighbor could spell economic trouble for the state’s consumers and workforce.

But it’s the added dynamic of how this country trades with Mexico that could do far greater damage to the state and national economies than President Donald Trump’s current trade battles with China or Canada, analysts warn.

Late Thursday, Trump announced he would begin imposing 5% tariffs on all products imported from Mexico on June 10 if that country didn’t do more to curb the flow of unauthorized immigrants traveling through Mexico on their way to the United States. Trump said he would increase it to as high as 25% by October if Mexico doesn’t act.

Since October 2018, when the federal government’s current fiscal year began, more than 460,000 undocumented immigrants have been apprehended on the southern border, surpassing 2018’s fiscal year total of 396,579. The administration has built temporary holding facilities in El Paso and the Rio Grande Valley to house more immigrants and announced earlier this month that more would be built within a couple weeks.

The tariff announcement comes as the Trump administration escalates its trade war with China, which has led both countries to impose billions in duties on goods imported to their respective countries.

But the impact from tariffs on Mexican goods could have a deeper reach because of just how many U.S. products contain parts or labor supplied by both countries, said Shannon O’Neil, the vice president, deputy director of studies, and Nelson and David Rockefeller senior fellow for Latin America Studies at the Council on Foreign Relations.

“The way U.S. workers will be hit by this is very different. The imports coming in from Mexico have the highest percentage of U.S.-made products within them,” she said. “On average, 40% of products are made in the U.S. so those American workers that are making that 40% are going to get hit as hard as their Mexican counterparts.”

Some industries — including automakers — import and export products back and forth across the border more than once, which means those goods could be subject to multiple tariffs. For example, two of the top U.S. exports to Mexico are auto and computer parts, while two of the top imports from Mexico are auto parts and computers, according to trade data analyzed by WorldCity.

The threat by the president comes after Mexico recently became the United States’ largest trading partner — it has been Texas’ top trade partner for several years. Through March, more than $150.58 billion in two-way trade passed through the countries’ ports: The U.S. exported $63.95 billion worth of goods and imported $86.63 billion worth of goods from Mexico. Texas’ ports at Laredo and El Paso are the the two busiest on the border, with $55.8 and $18.6 billion passing through those regions, respectively.

That means the effect from tariffs will be felt first in border states, O’Neil said.

Ray Perryman, the president and CEO of the Perryman Group, said a 5% tariff, once absorbed through supply chains and market adjustments, could eliminate more than 400,000 U.S. jobs and cause economic losses he estimated at $41.5 billion in gross domestic product.

“If Mexico were to retaliate and impose tariffs on the U.S., which is likely, the effects would be even greater. Texas would bear the lion’s share of this loss given the extensive commerce that occurs between the state and Mexico,” Perryman said in an emailed statement.

Some of the state’s lawmakers and business groups condemned the president’s move and questioned its legality.

“[We] strongly opposes President Trump’s threat to impose unilateral tariffs on Mexican imports. Our analysis suggests the tariffs may not rest on firm constitutional or legal ground, and probably violate international agreements including the North American Free Trade Agreement and those underlying the World Trade Organization,” said Laredo Mayor Pete Saenz, who serves as chairman of the Texas Border Coalition, a group of elected officials and private sector leaders that advocates for more resources at the nation’s land ports.

U.S. Rep. Henry Cuellar, D-Laredo, said the announcement could negatively impact ongoing negotiations between the United States, Mexico and Canada over the United States-Mexico-Canada Agreement, a trade pact seen by some lawmakers and economists as a much-needed improvement to the 1994 North American Free Trade Agreement.

“The President’s threat to impose tariffs on Mexico is a dangerous mistake that will have significant consequences to our economy,” he said. “To properly address the crisis at the southern border, we need to invest in our ports of entry, including increasing personnel, improving infrastructure, and advancing technology.”

Gov. Greg Abbott released a statement saying that the situation at the border has reached a “breaking point” and he put the blame on Congress.

“I’ve previously stated my opposition to tariffs due to the harm it would inflict on the Texas economy, and I remain opposed today,” Abbott said. “Nevertheless, the President is trying to address this emergency. Now, Congress must do its job and start passing laws to fix our broken immigration system.”

An aide to U.S. Sen. John Cornyn, R-Texas, added: “Senator Cornyn supports the President’s commitment to securing our border, but he opposes this across-the-board tariff which will disproportionately hurt Texas.”

U.S. Rep. Kevin Brady, R-The Woodlands, said he understands Trump’s frustrations, but added there is still time to work on a solution before the tariffs are implemented in 10 days.

“The President has made it clear that Mexico must do more to stop this crisis at the border which seemingly has no end, and he is serious about taking whatever actions are necessary to find a real lasting solution,” said Brady, the ranking member on the U.S. House Ways and Means Committee. “Mexico is a valued ally and the new tariffs are not yet in effect, so there is a window here for both countries to find common ground. It is in both of our interests to do so, economically and for stronger security.”

O’Neil said Mexican President Andrés Manuel López Obrador has already tried to meet some of Trump’s long-standing demands that Mexico do more to curb the flow of Central American migrants.

“He has deported as many people [in less than a year] as [former President] Enrique Peña Nieto did in his last year,” she said. “But the number of people coming has increased so that is the challenge. And with many fewer resources [than the United States].”