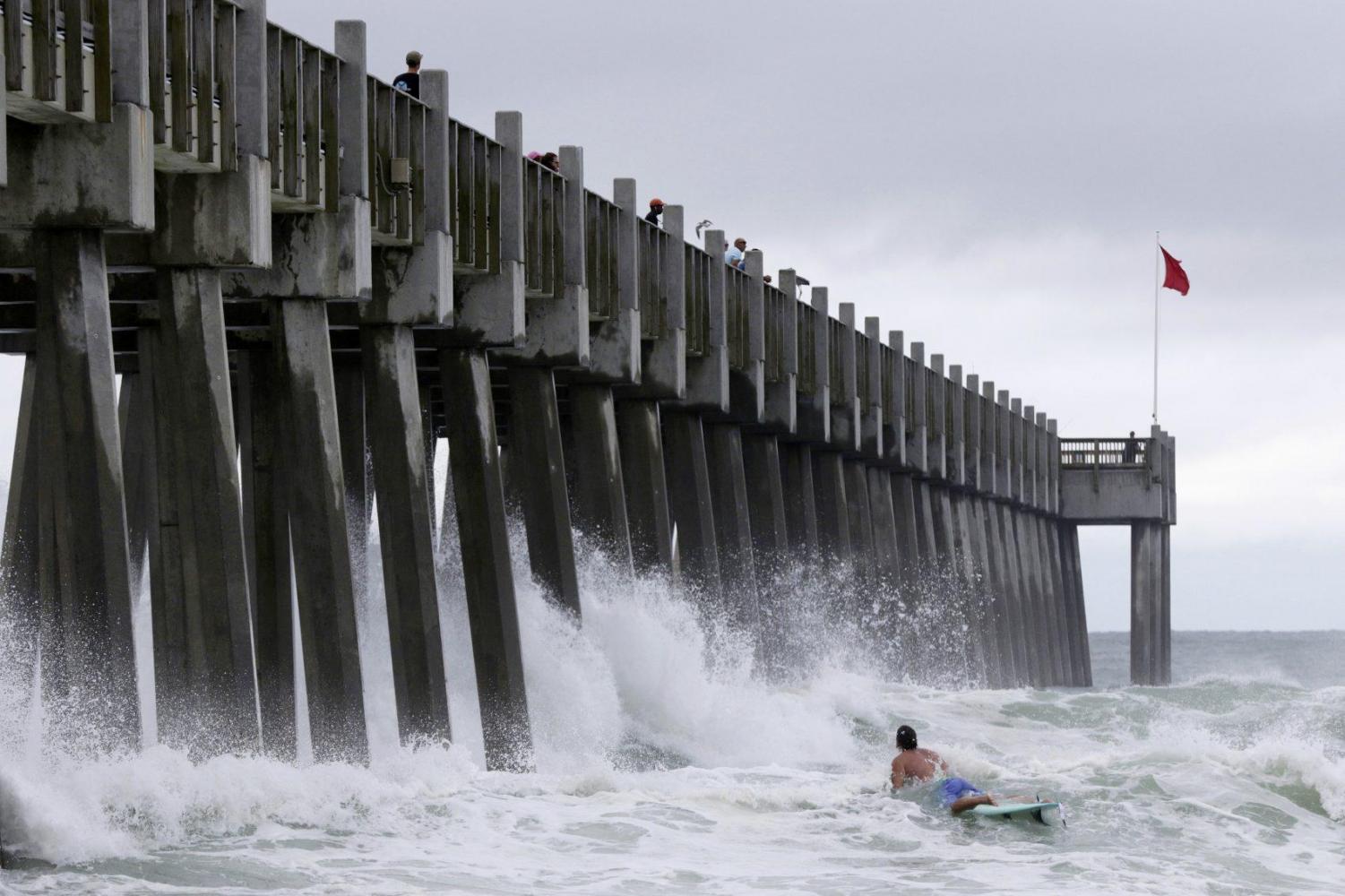 A surfer makes his way out into the water as a subtropical approaches on Monday, May 28, in Pensacola, Fla. The storm gained the early jump on the 2018 hurricane season as it headed toward anticipated landfall sometime Monday on the northern Gulf Coast, where white sandy beaches emptied of their usual Memorial Day crowds. (Dan Anderson / Associated Press)

A surfer makes his way out into the water as a subtropical approaches on Monday, May 28, in Pensacola, Fla. The storm gained the early jump on the 2018 hurricane season as it headed toward anticipated landfall sometime Monday on the northern Gulf Coast, where white sandy beaches emptied of their usual Memorial Day crowds.

Though the storm had weakened, forecasters, warned, it was capable of potentially life-threatening flash floods in the coming hours or days as the vast system spreads over Alabama and large areas of Georgia, Tennessee and the Carolinas.

Texas may face strong weather conditions on Monday night, brought on by subtropical storm Alberto. The Weather Channel also issued a tornado watch in effect for parts of Texas, Kansas and Oklahoma.

Forecasters warn Alberto, a still-menacing depression after its Memorial Day landfall on the Gulf Coast, is scattering heavy rains around the South amid heightened risks of flash flooding.

The first named storm of the 2018 Atlantic hurricane season, Subtropical Storm Alberto lumbered ashore Monday afternoon in the Florida Panhandle and then weakened to a depression overnight as it trekked inland. The storm that sprang from warm waters of the Gulf of Mexico was now a vast, soggy system as it headed inland, dumping heavy rains in bursts all around the region.

Though the storm had weakened, forecasters warned it was capable of potentially life-threatening flash floods in the coming hours or days as the vast system spreads over Alabama, Texas, large areas of Georgia, Tennessee and the Carolinas.

Authorities did not directly attribute any deaths or injuries immediately to Alberto. But in North Carolina, the state’s governor noted a television news anchor and a photojournalist were killed Monday while covering the fringes of the large system. A tree that became uprooted from rain-soaked ground toppled on their SUV, killing them instantly, authorities said.

“Two journalists working to keep the public informed about this storm have tragically lost their lives, and we mourn with their families, friends and colleagues,” Cooper said in a statement. “North Carolina needs to take Alberto seriously. I urge everyone to keep a close eye on forecasts, warnings and road conditions, especially in western North Carolina where even heavier rain is predicted.” 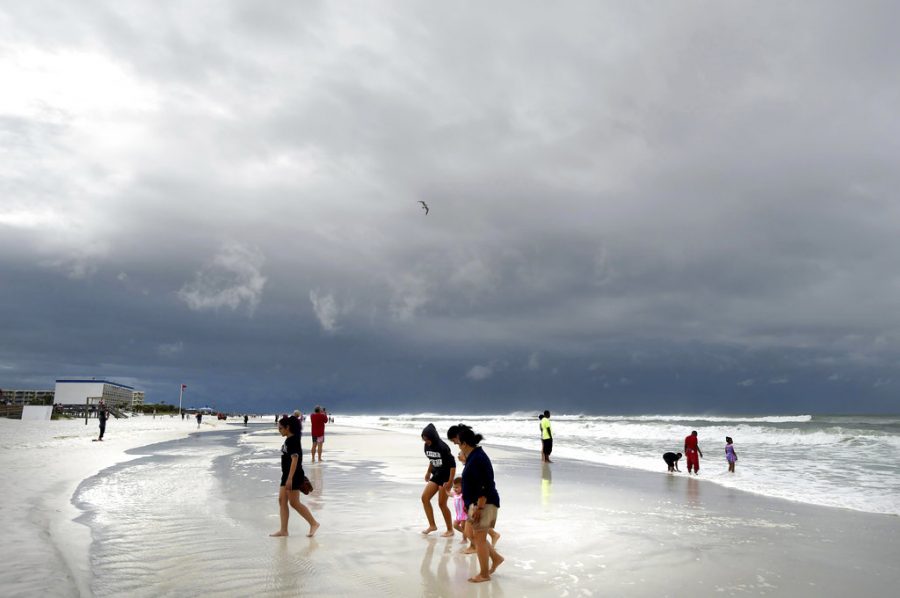 Between four and eight inches  of rain could soak the Florida Panhandle, Alabama, and western Georgia before the storm moves on. Isolated deluges of 12 inches also are possible in spots as the system heads toward the Tennessee Valley on Tuesday and later this week into the Ohio Valley and Great Lakes region.

Earlier Monday, Alberto rolled up big waves and tides along beaches of the northern Gulf Coast. Lifeguards posted red flags along the white sands of Pensacola Beach, where swimming and wading were banned as Alberto disrupted long holiday weekend plans for millions.

The storm forced some Memorial Day tributes to be cancelled across Florida’s Panhandle. Safety was the priority, but the decision was still a “heartbreaker,” said Tom Rice, a 29-year-old Army veteran who had helped with planning for a ceremony at Beal Memorial Cemetery in Fort Walton Beach.

Some stragglers still defied rain to pay tribute at the cemetery’s Veterans Tribute Tower, however. Rice said American flags had been placed Saturday on the graves of all 1,700 veterans buried in the cemetery.

“We got the flags out,” Rice told the Northwest Florida Daily News as wind whipped a massive U.S. flag flying at half-staff. “That’s what’s important.”

Jason Powell sought to keep his children entertained with movies and TV, adding he hoped the sun would come out again after Alberto blew over. “So far we’ve seen a lot of wind and the ocean is really high, covering up the entire beach,” Powell remarked.

Janet Rhumes said her group of friends from Kansas had been planning their Memorial Day weekend on Navarre Beach since October. They stocked up on groceries and settled in for card games. “We’ve never seen one before and we’re here celebrating a friend’s 20th birthday,” Rhumes said. “So how often can you say you rode a storm out?”

A tornado watch is also in effect for Texas, the Weather Channel said in a tweet.

As Alberto’s weakening center headed inland it was deprived of the warm Gulf waters that fuel tropical weather systems. As a subtropical storm, Alberto had a less defined and cooler center than a tropical storm, and its strongest winds were found farther from its center.

Some of the rain bands spread hundreds of miles from its center.

“Ten minutes later we get the call and it was them,” Tennant said at a news conference, his voice cracking.

Tennant did not directly blame rain that fell Monday from the fringes of Alberto for the deaths. He said the roots of the large tree tore loose from ground saturated by a week’s worth of rain. The men died instantly, their vehicle’s engine still running, Tennant added.