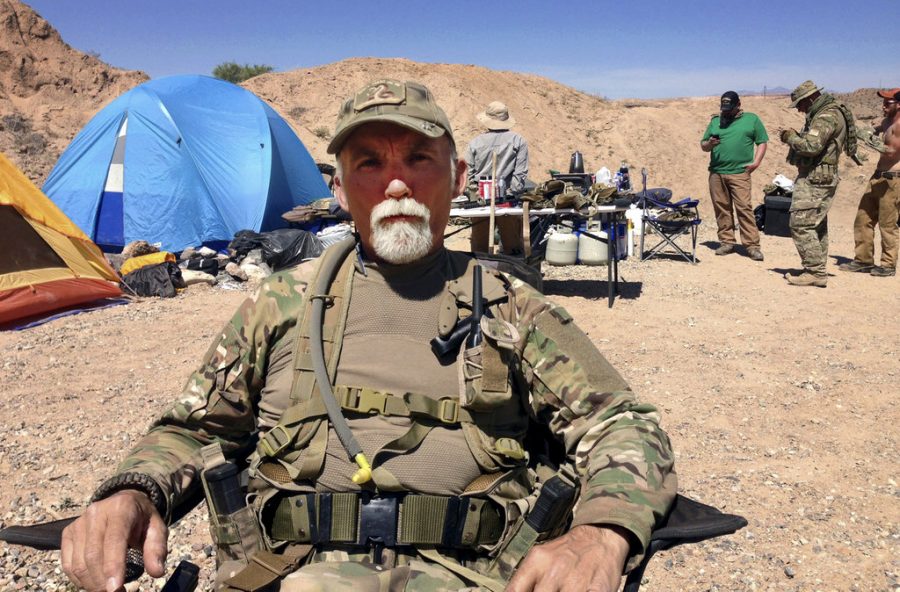 In this April 16, 2014 file photo, Gerald "Jerry" DeLemus, of Rochester, N.H., sits with a group of self-described militia members camping on rancher Cliven Bundy's ranch near Bunkerville, Nev. DeLemus is set to become the first person sentenced to federal prison on Wednesday, May 31, 2017, for his role in an armed confrontation with U.S. agents near Nevada rancher Cliven Bundy's ranch in 2014 on (AP Photo/Ken Ritter)

LAS  VEGAS — A New Hampshire judge sentenced a man Wednesday to more than seven years in prison for his role in organizing a 2014 armed protest over federal lands in Nevada.

Gerald “Jerry” DeLemus became the first person sentenced for his ties to the confrontation that occurred after Cliven Bundy and his backers tried to reclaim Bundy’s right to let his cattle graze on government land. Eighteen others are in custody.

DeLemus has been jailed for almost 16 months, so the sentence means the 62-year-old former U.S. Marine will spend about six more years behind bars. His attorney, Dustin Marcello, said he will appeal.

DeLemus arrived at the Bundy ranch hours after the tense armed standoff that led to the release of the rancher’s cattle. It was hailed as a victory in a decades-long fight over government-owned land.

He then spent more than a month in an encampment organizing armed patrols and serving as an intermediary between a self-styled militia and local authorities.

He had been expected to get a six-year sentence after pleading guilty last August to conspiracy to commit an offense against the U.S. and to interstate travel in aid of extortion.

But Chief U.S. District Judge Gloria Navarro in Las Vegas added time after faulting DeLemus for trying to withdraw his pleas. She said she did not think he accepted responsibility for his actions.

“I have to say, Mr. DeLemus, that you unfortunately are blinded by the information you choose to believe,” she said.

Navarro said  DeLemus could have advised Bundy to abide by court orders to pay 20 years of overdue grazing fees or to let agents round up his cattle from public land.

Instead he became a “bully vigilante, threatening peacekeepers of the community,” she said.

“I never heard you say you told Mr. Bundy … to follow the law,” she said.

DeLemus told the judge he traveled cross-country with weapons because he’d heard government snipers had surrounded the Bundy home.

He said he was willing to “take a bullet” to protect the family.

“My concern was that someone would get hurt,” he said. “It wasn’t the cows. I didn’t want that family injured. God will know in the end.”

DeLemus said he never would have shot at law enforcement. He cited a biblical passage that there is no greater love than to lay down one’s life for one’s friends.

“I may not have given it out there,” he said of the standoff near Bunkerville, about 80 miles northeast of Las Vegas. “I’m giving it now, in jail.”

Bundy, two of his sons and two other defendants are due for trial later this year. Six others may not be tried until early next year.