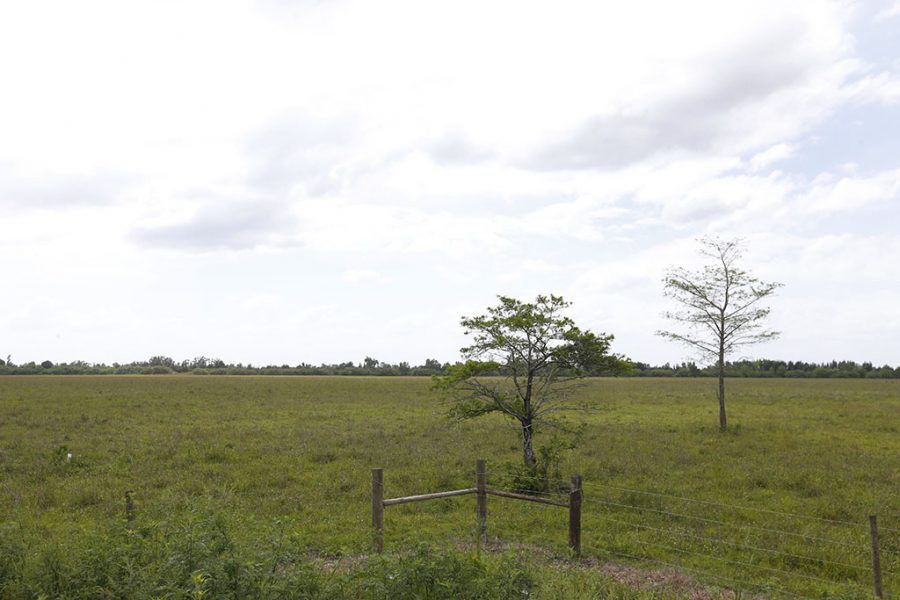 The land where developers are proposing to build American Dream Miami, a 200-acre project on the edge of the Everglades in bustling South Florida that would dwarf any other shopping mecca in North America. (AP Photo/Wilfredo Lee)

Developers are proposing a massive six million-square-foot project on the edge of the Everglades in bustling South Florida that would dwarf any other shopping mall in North America, including Minnesota’s Mall of America.

Miami-Dade County officials could vote this fall to approve it, despite critics saying it will worsen the region’s traffic problem and produce mostly low-paying jobs. In general, malls across the U.S. have been in a slow decline as shoppers flock to the internet.

Don Ghermezian, president of developer Triple Five Worldwide Group of Edmonton, Canada‚ which also built Mall of America, said this is not your father’s shopping mall.

In addition to millions of square feet of retail, the project would include an indoor ski slope, a water park, a submarine ride attraction, a skating rink, 2,000 hotel rooms, theaters, a performing arts center and places to eat and drink.

The idea, Ghermezian said at a recent public hearing, is to give millions of residents and tourists in the Miami area a family-friendly alternative to Orlando attractions such as Disney World and Universal.

Triple Five predicts American Dream will draw 300,000 visitors a day and create about 14,500 permanent jobs. Politicians are lining up in support.

“World class cities have world class facilities,” said Dennis Moss, a Miami-Dade County commissioner. “All of the great things that we have going in this community, a huge disadvantage is we don’t have a lot of family entertainment and amusement activities. This is a game-changer.”

Local resident Stuart Bloomberg said at the recent hearing that Miami needs something just like that.

“I am tired of hearing everybody say there’s nothing south of I-4,” Bloomberg said of the area below the interstate that runs through Orlando. “It’s about time Miami-Dade participated. Let’s not blow it this time.”

South Florida’s existing malls, including the region’s top tourist attraction Sawgrass Mills, are watching nervously. They say they are not opposed to American Dream but do not support tax dollars going to subsidize it. So far, no public money is financing the project.

“We just want them to meet the rules like everybody else has to meet,” said Alex Heckler, attorney for a group of existing malls.

Many malls around the country are in decline. Faith Hope Consolo, chair of retail, marketing and sales at Douglas Elliman Real Estate in New York, said the retail world is “moving toward entertainment and creating experiences.” She said Triple Five’s plan in Miami has a high chance of succeeding.

“What’s on the way out are the tired strip malls that haven’t been updated in 30 years,” Consolo said. “What’s in are beautiful shopping complexes, entertainment destinations. What’s going to work in the future is the focus on experience, one-of-a-kind places where you want to go.”

Still, not everyone is convinced American Dream is a good idea.

It would be built at the confluence of two major highways‚ Interstate 75 and Florida’s Turnpike‚ that are already frequently choked with traffic. State planning officials have raised concerns about a massive increase in traffic without the road capacity to handle it, but have not suggested scrapping American Dream.

There are also plans by a separate developer, The Graham Companies, to build a 339-acre (137-hectare) project adjacent to American Dream that would include office space, retail and 2,000 apartments.

Doug Travis Williams, who lives in South Miami, said he often sits in traffic two or three hours a day.

“We don’t have the infrastructure in place to do something like this. We can’t even get to where we need to get now,” he said.

Meryl Fixler, who works in the Doral area south of the project, said she’s not that worried about congestion and that existing malls have little attraction for children.

“I am tired of going to your malls and sitting in a little pit area and have nothing to do,” Fixler said.

There are also concerns that many of the jobs created will be relatively low-paying. Triple Five estimated that 60 percent of the jobs would pay less than $25,000 a year.

“This is a once in a lifetime opportunity that we should make every effort to make happen, rather than finding ways to thwart it,” she said. “There are greater goods to consider in this situation.”