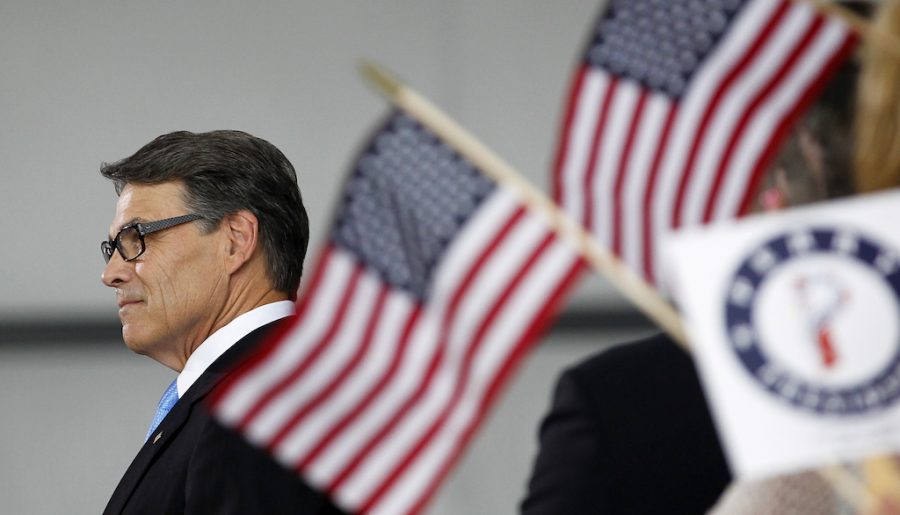 Former Texas Gov. Rick Perry speaks to supporters after announcing the launch of his presidential campaign for the 2016 elections Thursday in Addison. Perry opened his second bid for the Republican presidential nomination Thursday, pledging to "end an era of failed leadership" and hoping this campaign will go better than his last one. (AP Photo/Tim Sharp)

ADDISON Former Texas Gov. Rick Perry opened his second bid for the Republican presidential nomination Thursday, pledging to “end an era of failed leadership” and hoping this campaign will go better than his last one.

Perry announced his candidacy in a humid airport hangar in the company of fellow veterans and a hulking C-130 cargo plane, like one he flew for the Air Force. He is one of the few veterans in a bustling Republican field short on military experience.

With Perry in the contest and confirmation earlier Thursday that former Florida Gov. Jeb Bush will run, 11 major candidates now are vying for the GOP, and more are expected to join.

For Perry, it’s a redo of a 2012 effort that went poorly as he tumbled from flavor-of-the-month front-runner after some gaffes. He’s still trying to live down the “oops” he uttered in a brain-freeze moment during a debate in the 2012 race.

Perry brings a strong economic record in Texas to the contest, as he did four years ago, and his speech underscored the ability of governors past and present to point to achievements in office, not just votes and rhetoric of those in Congress.

“Leadership is not a speech on the Senate floor,” he said. “It’s not what you say. It’s what you do.”

That was an indirect swipe at Texas Sen. Ted Cruz, Florida Sen. Marco Rubio and other rivals with little to no executive experience.

“Let’s give them real leadership,” he said of Americans. He told supporters “we have the power” to project American strength again and grow the economy, and “that is exactly why today I am running for the presidency.”

For months, he’s been in motion in the early voting states of Iowa, New Hampshire and South Carolina, but starts farther behind other candidates than four years ago.
“It’s going to be hard to make a first impression a second time,” said Ford O’Connell, a Republican strategist in Washington.

Perry made his announcement in front of prominent veterans, including six retired Navy SEALs. One of them, Marcus Luttrell, is a longtime Perry friend and only survivor of a four-man team attacked in Afghanistan and featured in the 2013 film “Lone Survivor.” Also in the audience was Taya Kyle, widow of Chris Kyle of “American Sniper” fame.

Despite his gaffe on a Michigan debate stage in November 2011 — when he forgot the third federal agency he promised to close if elected, then muttered, “oops” — Perry still has the policy record that made him an early force last time.

Perry left office in January after a record 14 years as governor. Under him, the state generated more than a third of America’s new private-sector jobs since 2001.

While an oil and gas boom fueled much of that economic growth, Perry credits lower taxes, restrained regulation and limits on civil litigation damages. He also pushed economic incentives to lure top employers to Texas and repeatedly visited states with Democratic governors to poach jobs.

Perry was thought to be a cinch for four more years as governor in 2014, but instead turned back to White House ambitions.

His effort may be complicated this time by a felony indictment on abuse of power and coercion charges, from when he threatened — then carried out — a veto of state funding for public corruption prosecutors. That came when the unit’s Democratic head rebuffed Perry’s demands that she resign following a drunken driving conviction.

Perry calls the case against him a political “witch hunt,” but his repeated efforts to get it tossed on constitutional grounds have so far proved unsuccessful. That raises the prospect he’ll have to leave the campaign trail to head to court in Texas.

Perry blamed lingering pain from back surgery in the summer of 2011 for part of the reason he performed poorly in the 2012 campaign. He has ditched his trademark cowboy boots for more comfortable footwear and wears glasses that give him a serious look.