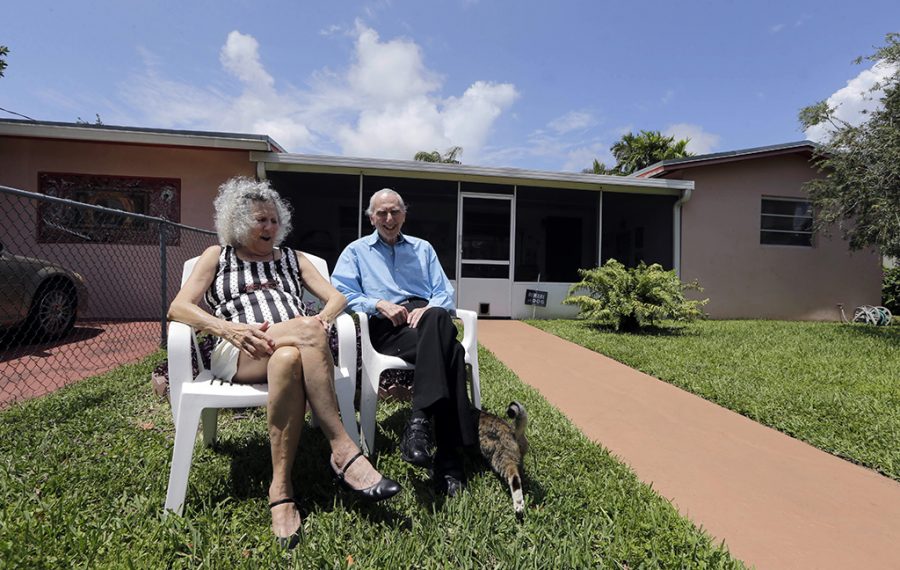 In this May 11, 2015 photo, Al Karp, right, and wife Saundra, pose in front of their home in North Miami Beach, Fla. The Karps, along with their son, Larry, perform old standards locally as the Karp Family band to ease stress and help raise money to save their home from foreclosure. (AP Photo/Alan Diaz)

WASHINGTON Al and Saundra Karp have found an unconventional way to raise money and help save their Miami-area home from foreclosure: They’re lining up gigs for their family jazz band.

They enjoy performing. But it isn’t exactly how Al, an 86-year-old Korean War vet, or Saundra, 76, had expected to spend their retirement.

Of all the financial threats facing Americans of retirement age — outliving savings, falling for scams, paying for long-term care — housing isn’t supposed to be one. But after a home-price collapse, the worst recession since the 1930s and some calamitous decisions to turn homes into cash machines, millions of them are straining to make house payments.

The consequences can be severe. Retirees who use retirement money to pay housing costs can face disaster if their health deteriorates or their savings run short. They’re more likely to need help from the government, charities or their children. Or they must keep working deep into retirement.

“It’s a big problem coming off the housing bubble,” said Cary Sternberg, who advises seniors on housing issues in The Villages, a Florida retirement community. “A growing number of seniors are struggling with what to do about their home and their mortgage and their retirement.”

The baby boom generation was already facing a retirement crunch: Over the past two decades, employers have largely eliminated traditional pensions, forcing workers to manage their retirement savings. Many boomers didn’t save enough, invested badly or raided their retirement accounts.

The Consumer Financial Protection Bureau’s Office for Older Americans says 30 percent of homeowners 65 and older, or 6.5 million people, were paying a mortgage in 2013, up from 22 percent in 2001. Federal Reserve numbers show the share of people 75 and older carrying home loans jumped from 8 percent in 2001 to 21 percent in 2011.

In markets hit hardest by the housing bust, a substantial share of older Americans are stuck with mortgages that exceed their home’s value. In Atlanta, it’s 23 percent of homeowners 50 and older, according to the real-estate research firm Zillow. In Las Vegas, it’s 26 percent.

In the worst cases, hundreds of thousands of older Americans have lost homes to foreclosure. A 2012 study by the AARP found that 1.5 million Americans 50 and older lost homes between 2007 and 2011.

In mid-2010, Tod Lindner lost his oceanfront home in California’s Marin County. He ran into trouble after the finance company that employed him was acquired and the new owners refused to pay him fees he thought he was owed and which he was counting on.

Lindner had bought the house for $330,000 in the late 1980s. But he’d refinanced to pull out money to invest, swelling the mortgage to $680,000. Lindner tried to work out a modified mortgage, but his bank foreclosed instead. He and his wife sought bankruptcy protection, rented an apartment and slashed their spending.

“At age 70, I just started working for another company” in banking, Lindner said. “My plan would have been to retire.”

Seniors fell into housing trouble in varying ways. Some lost jobs. Some overpaid for homes during the housing boom, thinking they could cash in later.

Some made unwise decisions to refinance mortgages and pull cash out of their homes to meet unexpected costs, help their children or embark on spending sprees.

Jim, 67, and LaRue Carnes, 63, moved to Sacramento, California, in 1978 and bought a house for $54,000. For 33 years, Jim worked as a newspaper reporter and editor. They refinanced their mortgage several times and pulled money out of the house and took on higher mortgage payments. “Foolishly, like so many Americans, we used the house as a bank,” LaRue says.

In 2011, Jim was laid off, and the couple fell behind on mortgage payments. Three times, they dipped into retirement savings to fend off foreclosure. Eventually, with a $25,000 grant from a state program, Keep Your Home California, they negotiated a new mortgage they could afford.

Still, they’re still struggling. Once a month, they eat free breakfast at a church, bringing home bagels and fruit. They “never thought we would be partaking of such,” LaRue says.

Al and Saundra Karp bought their three-bedroom home in North Miami Beach, Florida, for $77,000 in 1980. They refinanced, partly to pay down credit-card debt, and their mortgage swelled to $288,000.

Al kept working as a tax accountant into his late 70s. But Alzheimer’s disease forced him into retirement.

The couple is getting by on about $2,500 a month in Social Security and Veterans Administration benefits, plus food stamps and help from their two sons. They stopped paying the mortgage and are fighting foreclosure in court.

To ease the stress and earn some cash, they perform old musical standards as the Karp Family — Saundra on vocals, Al on sax, son Larry on keyboards.

“I’m trying desperately to stay here,” Saundra says. As for Al: “He thinks the mortgage is paid. He hasn’t got a clue.”