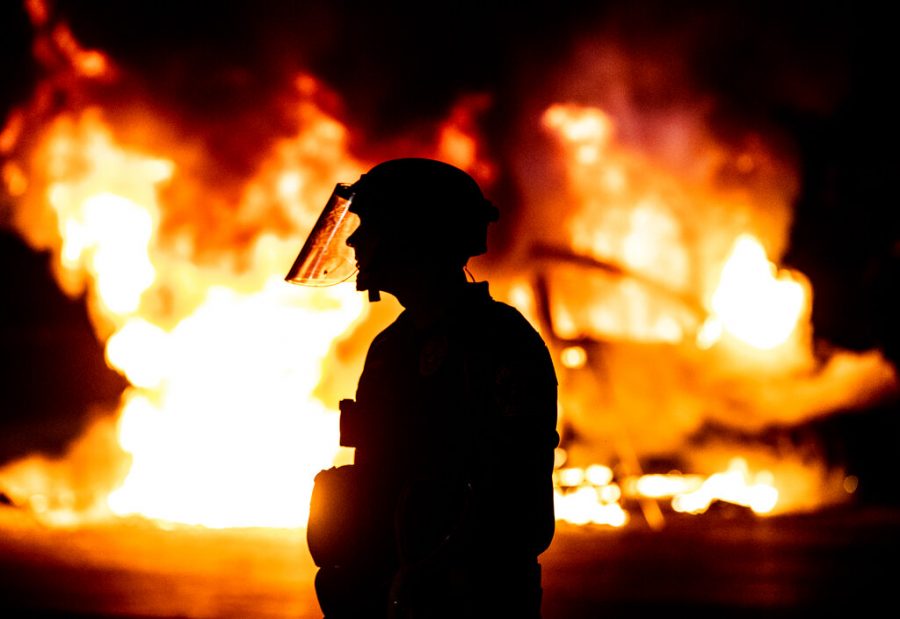 RICARDO B. BRAZZIELL/Austin American-Statesman via AP

A police officer stands guard as Austin Fire Department puts out a car fire under Interstate 35 in Austin May 30 during a protest over the death of George Floyd, a handcuffed black man who died in Minneapolis police custody.

Gov. Greg Abbott announced Sunday afternoon that the entire state of Texas will be placed under a disaster declaration in response to demonstrators in several Texas cities protesting the death of George Floyd, a black man who was killed Monday in Minneapolis police custody.

The declaration allowed Abbott to designate federal law enforcement officers to perform the duties of peace officers in Texas.

Thousands of protesters marched in Texas cities Friday and Saturday, outraged after Floyd was filmed crying out for help as a white police officer pinned him to the ground with a knee to his neck. The officer, Derek Chauvin, was later arrested and charged with third-degree murder and manslaughter.

“Every Texan and every American has the right to protest, and I encourage all Texans to exercise their First Amendment rights,” Abbott said in a statement. “However, violence against others and the destruction of property is unacceptable and counterproductive.”

His announcement comes a day after he activated the Texas National Guard “in response to protest violence” across the state. In several of the state’s large metropolitan areas — including Houston, Austin, Dallas and San Antonio — protesters clashed with police who sometimes used rubber bullets and tear gas.

Abbott also sent state resources to Houston, Austin, Dallas and San Antonio on Saturday afternoon and said he’s spoken to the mayors of all four cities, as well as law enforcement officials. He said Sunday that he also increased those resources for cities throughout Texas and that the FBI has deployed tactical teams to assist state and local law enforcement.

“Violence, vandalism and looting will not be tolerated in this state, and those found in violation of the law will be arrested and prosecuted,” he said.

The governor has previously called Floyd’s death “horrific” and the “consequence of poor police work.”

His declaration Sunday comes as other local, statewide and national leaders have called for peaceful demonstrations.

“As protests have turned violent in various areas across the state, it is crucial that we maintain order, uphold public safety and protect against property damage or loss,” Abbott said in a statement Sunday announcing the statewide disaster declaration. “By authorizing additional federal agents to serve as Texas Peace Officers we will help protect people’s safety while ensuring that peaceful protesters can continue to make their voices heard.”

Prior to Abbott’s announcement, several Texas cities took measures into their own hands. On Saturday evening, the mayor of San Antonio imposed a curfew as a result of escalating tensions due to the protests.

In Dallas, where officials defended the use of tear gas at protests for Floyd, Dallas Police Chief Reneé Hall said Sunday afternoon that a 7 p.m. curfew will go into effect Sunday and end at 6 a.m. “for the next several days,” The Dallas Morning News reported. Later in the day, Dallas Mayor Eric Johnson issued a local disaster declaration for the next week; it allows the city manager to impose curfews, along with other emergency measures.